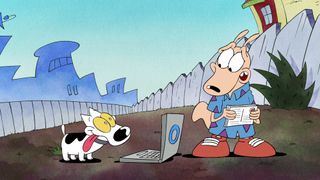 Static Cling isn't content to just give fans more Rocko. Instead, the special insists on interrogating the audience about why we're so invested in a Rocko revival, anyway. Imagine if Gilmore Girls: A Year in the Life or Arrested Development Seasons 4 and 5 had really, really understood what made those shows so good the first time around, and that's Static Cling in a nutshell.

If you've got 45 minutes on your hands and any affinity at all for Rocko, Heffer, Filburt and the gang, you owe it to yourself to check out Static Cling. And then, perhaps, you should spend a few minutes thinking about how nostalgia has a dark side, and we pop culture enthusiasts may be enabling it.

Be warned that while I've done my best to avoid major spoilers, I discuss the setup of the story and a few individual plot points from the beginning, middle and ending. Consider watching the special before reading this piece if you want to go in totally fresh.

In case you haven't watched Rocko's Modern Life since 1996 (1996? Really? I can't believe it's been that long), the series ended with the three best friends, as well as Rocko's dog, Spunky, blasting off into outer space. And, apparently, that's where they stayed for 20 years. Rocko, Heffer and Filburt have spent two decades rewatching The Fatheads: their favorite cartoon.

When the VCR (kids, ask your parents) finally spits out their well-worn tape, complete with lips and a spewing noise, Rocko and his pals embark on a quest to return to Earth and convince Fatheads creator Ralph Bighead to make brand-new episodes of the show.

Cue a hasty return to O-Town, where we learn that the sleepy little suburb has changed a lot in the last 20 years. Rocko and company pick up smartphones at the Apple-like O-Store, guzzle fancy coffee at Buzzbucks, wait on line for popular food trucks and even travel the world in a personal helicopter drone.

Static Cling is quick to poke fun at some of our favorite modern institutions, but unlike a lot of other revivals, the special never feels mean-spirited. Buzzbucks has tasty coffee. Heffer and Filburt have a great time taking head-swap selfies. Chokey Chicken (yes, they really somehow slipped that past the censors back in the '90s) now serves organic, free-range meat. Despite Rocko's insistence that "The 21st century is a very dangerous century," Static Cling doesn't seem to think it's all bad.

The criticism, however, becomes a little more nuanced when the giant Conglom-O corporation attempts to make new Fatheads episodes without Ralph. The result is a 3D monstrosity that looks like the laziest YouTube-farm content.

We've seen so many lazy reboots (often indifferent to the desires of the original creators) in the past few years, I've lost count. From MacGyver to The Mummy, and from Charlie's Angels to Teenage Mutant Ninja Turtles, license holders seem to think that as long as there's a recognizable name attached to a property, the final product's quality doesn't matter. That's an easy point to make, to be fair, but it's one worth repeating in our nostalgia-saturated modern mediascape.

Back to the future

From here, Rocko accidentally becomes the centerpiece of an online fan campaign to bring back The Fatheads. Static Cling injects a bit of wry commentary about how quick we are to prop up heroes on social media — and how much we adore making them martyrs the second they do something we don't like.

The meta-commentary here isn't hard to parse. Rocko is so desperate for new episodes, even after 20 long years, because The Fatheads sustained him during a difficult time. To Rocko, The Fatheads isn't just a dumb cartoon (and even by Rocko's Modern Life standards, it is a very, very dumb cartoon). It represents spending time with his friends, alleviating boredom and, most importantly, keeping his sanity during a very long and trying situation.

It is probably not unreasonable to say that many fans who grew up on Rocko's Modern Life have had their own difficulties in the last 20 years, and may have leaned back on nostalgic TV as a way to anchor themselves and their feelings.

That's what's beautiful about Static Cling. The special takes a critical eye to nostalgic reboots, but it doesn't begrudge its audience for wanting them. Creator Joe Murray seems keenly aware that the period between 1996 and 2019 has not exactly been a high point for humanity, and if a satirical cartoon about a long-suffering wallaby makes the real world a little more bearable, who is he to deny it?

The balance between nostalgia and change becomes the crux of Static Cling. (Think about the title for a moment if you need further evidence.) Rocko's obsession with The Fatheads, the evolving nature of O-Town and a respectfully handled transgender subplot make Rocko and his antagonistic next-door neighbor Ed Bighead grapple with their own rose-tinted views of the past.

In the end, Rocko isn't completely satisfied with the way things turn out — and that, too, seems fitting for the show's target audience. Folks from my generation (roughly speaking, people born between 1981 and 1996) have grown up with terrorist attacks, market crashes, stagnant wages, decreased standards of living and a general sense that no matter what we do, the system is stacked against us.

Maybe that's why we're so keen on reliving our childhoods with flashier production values, even if we know it's not as good. Sure, The Force Awakens was just a flabbier rehash of A New Hope, but we got a few more hours with Han Solo, didn't we? And no one needed a CGI-nightmare version of The Lion King, but can't we just retreat into a familiar story for a little while?

Static Cling says of course you can; just don't become so obsessed with looking backward that you ignore the potential for real improvement along the way.

That was a hoot!

Fans of Rocko's Modern Life are extremely lucky. Static Cling is funny without being grating, sweet without being cloying and introspective without being pretentious. It's also got a lot of the same sight gags and cartoon physics that made the original show so endearing. I imagine a lot of grown-up fans are going to want to share Static Cling with their kids, who are just about the right age to start appreciating Rocko's brand of off-kilter humor.

Static Cling will probably be the last hurrah for our favorite Australian immigrant (sorry, Portia de Rossi), but it's a good place to end Rocko's story. The world moves on, but some of our favorite franchises stay with us for the long haul. And, if we're very lucky, they'll even change with us as we go.