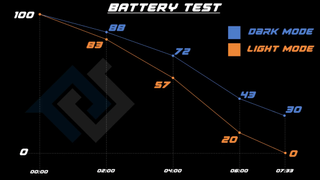 If you'd like to boost your iPhone's battery life, turning on iOS 13's Dark Mode might be the best way to go about it.

The folks over at PhoneBuff have published a video showing battery life differences between the iOS 13 Dark Mode and Light Mode. After testing it with a robotic arm that engaged in a variety of activities over several hours, the outlet found that the iPhone XS in Dark Mode lasted longer.

During the test, the robotic arm did everything users would typically do in using an iPhone, including texting friends on the Messages app, watching YouTube videos and  using Google Maps. It's also worth noting that the iPhone's screen in the testing was kept at 200 nits of brightness, so it wasn't at the top brightness or kept too low.

Interestingly, PhoneBuff found that iOS 13's Dark Mode worked most effectively on iPhones with OLED displays. With iPhones that don't use OLEDs, the difference in battery life wasn't as great.

Apple unveiled Dark Mode in iOS 13 this year. Dark Mode is increasingly finding its way into apps and across the Internet, due in no small part to it reducing eye strain on users. But since it also seems to require less strain on system resources, it also helps to save battery life.

It's important to remember that if you want top battery life, you'll need to go with Dark Mode — and use apps that support it in Dark Mode, as well.