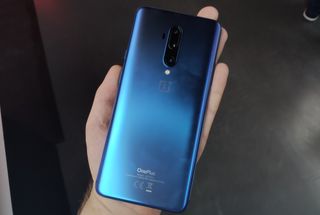 At an event in London today (Oct. 10), OnePlus finished what it started at its September launch event and revealed the OnePlus 7T Pro, plus a few interesting extras.

The OnePlus 7T Pro joins the OnePlus 7T to complete the 2019 product lineup for the upstart phone maker. Here’s a complete rundown of what OnePlus announced today.

OnePlus’ big new announcement is the upgraded version of the OnePlus 7 Pro — the 7T Pro. With its 6.6-inch notchless display with 90Hz refresh rate, pop-up camera, upgraded Snapdragon 855 Plus CPU and a larger and quicker charging battery, the OnePlus 7T Pro is just like the old model but slightly better. Considering how much we liked the first version of the 7 Pro, that’s just fine by us.

We have a deeper look at the latest OnePlus phone in our OnePlus 7T Pro hands-on.

Yes, we’ve seen this one before, but it’s still a really good phone that deserves a little more time in the limelight. The OnePlus 7T provides a lot of the same benefits as the larger 7T Pro, like a 90Hz refresh rate, triple rear cameras, faster performance and charging but with a slightly smaller notched screen and a lower price. It’s a great value phone that doesn’t feel cheap whatsoever.

The 7T will be available in Europe from Oct. 17, for the price of £549 for the single 8GB RAM/128GB storage option. U.S. users got introduced to this phone back in September, and can already pre-order the 7T from OnePlus; the $599 arrives at T-Mobile on Oct. 18.

If it’s the most exclusive and powerful you’re after and you don’t mind having a phone with a chassis that will turn heads, then feast your eyes on the limited run McLaren Edition of the 7T Pro, the successor to last year’s OnePlus 6T McLaren Edition.

The McLaren Edition takes the existing 7T Pro and adds a special black color option inspired by the composite materials used on the British supercar manufacturer’s road vehicles. You also get a luxurious alcantara case included in the box, some trademark McLaren papaya orange highlights on the phone, a reworked OxygenOS design with unique animations, and a RAM upgrade to 12GB accompanied by 256GB storage. This is the ultimate OnePlus phone, and will cost you an extra £100 on top of the normal 7T Pro for a price of £799. If you’re interested, it’ll be available, a little later than the other phones, on November 5.

The OnePlus Bullets Wireless 2 headphones now have a new color option — olive green. These $99/£99 neckband-attached buds are great all rounders considering the asking price. They’re suitable for use when working out, and they produce a good sound, have a lengthy battery life and use a clever magnetic switch so they turn on as soon as you pull the earpieces apart. So if you want to experience them in a new unique shade, now’s the time to try them out.

As announced during last month’s OnePlus 7T launch, OnePlus’ take on Android has moved to version 10.0, featuring Android 10. New features include more time options for the phone-locking Zen Mode, improved gesture navigation, an instant translation tool for video calls (although this is ‘coming soon’), enhanced Google Lens features and you can now switch apps in landscape mode rather than having to switch to a portrait orientation each time, on-device AI photo gallery organization, plus numerous other small optimizations and new customization options.

OnePlus also says it will be the first to ship Android 10 out of the box once the 7T series goes on sale. In addition, these updates will be available on the OnePlus 5 and later handsets via an over-the-air update in the coming months.

As a final small announcement to round the event off, OnePlus announced that it’s teamed up with Player Unknown’s Battlegrounds (or PUBG to its friends) to offer an optimized experience of the first-person shooter game on its phones. What exactly this entails is unknown, but if you’re a big fan of the battle royale genre, this is something for you to pay attention to if you want the best experience possible while earning your winner winner chicken dinner.