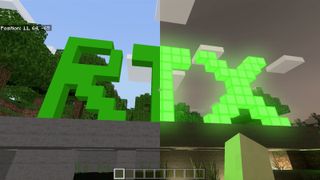 Minecraft is one of the most-played games in the world, even a decade after its initial alpha launch. Its trademark aesthetic of cubes and flat simple colors is recognised around the world, but Microsoft, the owners of Minecraft, want to shake that up.

Using Nvidia’s ray tracing technology (GeForce RTX in Nvidia’s own terminology), Minecraft RTX was revealed at Gamescom in August of this year, and will be coming to Minecraft players as part of a free update compatible with existing worlds "soon" according to the developers.

This ditches the normal rasterisation lighting model for a more realistic method that uses actual light sources to accurately light the environment. But looking at the games Nvidia is showing off on its RTX page, Minecraft is an odd one out, given that it’s in the company of high fidelity games like Cyberpunk 2077, Call of Duty Modern Warfare and Watch Dogs: Legion.

No doubt some of you reading this are a little skeptical of the use of ray tracing in Minecraft too. When I mentioned in an editorial meeting that I was writing this story, one of my colleagues loudly scoffed at the idea that Minecraft needed RTX. But having gone hands-on with the game for a thirty-minute demo, I can say that Minecraft is perhaps one of the best examples of how you can use ray tracing to enhance a game.

First off, the game just looks better, even with the default textures. As one of the Nvidia reps pointed out as I played, you can make games feel more realistic without making them look realistic. Having light reflect in glass or water, beam down through holes in the ceiling above, or produce a subtle glow from around a corner feels natural even though the world itself is anything but.

In the demo, I had buttons to hot-swap between RTX and non-RTX lighting, which is why we’re able to show you the differences in these screen shots. It’s not confirmed whether instant swapping will be a feature in the official release, but I think it would be a fun addition if developers Mojang could manage it.

The first world I tried consisted mostly of a fancy house designed to show off all the different kinds of lighting. It was far easier to work out what materials everything was meant to be, helped along by a custom texture pack. It’s been several years since I played Minecraft, so recognising what the blocks were made of without RTX would have been very difficult for me without this.

The real benefit that ray-tracing provides to Minecraft is something woolier - storytelling and player expression. Minecraft doesn’t let players make cutscenes, and only offers text-based interaction with other users via in-game chat or signs by default, and so to tell stories without resorting to external methods like text documents or YouTube videos, you need to rely heavily on the environment.

Minecraft already gives you plenty of environmental control thanks to an easy to understand building system, and Creative mode which lets you break the rules to construct whatever you like without limits. The addition of RTX lighting to work with lets you draw attention towards or away from things, much like game developers do when designing game environments from the ground up, helping guide players in certain directions or making sure they notice something.

For example, in the second world I tried out, a linear tour through multiple biomes, the path led me into an icy crevasse. With RTX enabled, the only light came from the sky peeking through the thin gaps in the ceiling. At the end of the room stood a throne made of blocks of ice. In the standard game, this could easily have been mistaken for just a random pile of , but with RTX on and the lamps either side illuminating it realistically, the throne was without a doubt a throne.

On the other hand, you can achieve total darkness in-game. Even underground or at night, you can still see as normal in the base game, albeit with altered colors. Heading into caves or basements in Minecraft RTX now becomes intimidating, even when I knew in my demo that there were no zombies, skeletons or other mobs to contend with. You can tell by the glow cast on the walls that there’s lava somewhere below your feet that you wouldn’t have noticed otherwise, and seeing daylight through a cave mouth gave me a little buzz as I sprinted to escape the darkness.

It’s a pity that the only people who will be able to try this out will be players using one of Nvidia’s RTX-enabled graphics cards. The cheapest of these cards currently retails for $399/£329, but you’ll probably want a more powerful one to get the frame rate and resolution that you desire. However, as the entry price for ray-tracing compatible cards falls in the coming years, and particularly when it debuts on the next generation of consoles like the PS5 or Xbox’s Project Scarlett, more and more people will be able to try out this lighting engine.

I don’t think every player will want to enable RTX, even if it is available to them. But having it there as an option just adds an extra dimension of creativity to a game that has stayed so popular for so many years because of the power it hands players to design exactly the experience they want.