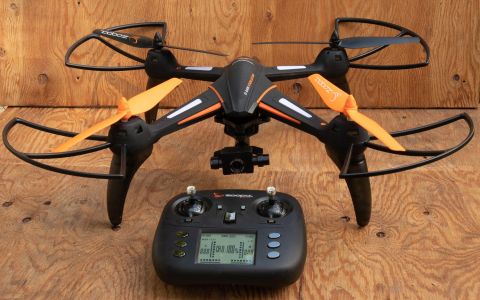 There's no reason why a cheap drone has to look cheap. Modern manufacturing means that something can be inexpensive and cool-looking, such as the Phoenix HD Q900. Priced at $149, the Phoenix is a relatively affordable drone that looks cool, comes with two-axis image stabilization, captures pretty good video for the price, and is fun to fly.

The Phoenix HD is a smart-looking drone with an minimalist, futuristic design. Finished in matte black and orange plastic, it looks like a sci-fi prop.

The battery slides into the back of the small drone body, and the camera is mounted on a two-axis stabilizer on the nose. Around this are the arms, motors and four large rotor blades, each with a diameter of 9.4 inches. With a  tip-to-tip size of 19 x 19 inches, and a takeoff weight of 1.4 pounds, the Phoenix HD is a large, but light drone.

The Phoenix HD is operated solely through the included controller, a rather large and button-studded box. Few of these buttons are labeled, so it can be a little difficult to figure out what each does if you don't have the manual at hand. When flying the Phoenix HD, I also managed to inadvertently turn off the controller  more than once.

Zoopa offers an iOS and Android app that shows a preview of the video. This can also replace the controller  if you want, using touch-screen controls in lieu of physical control sticks. It's a very basic app, with poorly labeled controls and  basic features. The top of the remote has a simple pullout holder for your smartphone, but it isn't very stable. My Galaxy Note 8 slipped out of place a lot.

The Phoenix HD is not a particularly fast nor maneuverable drone. Instead, it focuses on creating a stable platform for shooting video, so that the drone turns and moves slower than many similarly priced devices. It has enough speed and maneuverability to capture some decent shots, though.

MORE: Cheap Drones (Under $150), Ranked From Best to Worst

A few simple flight features are included: You can take off with the touch of a button, and the drone will automatically lift off and hover a few feet above the ground. Landing is similarly simple: You just pull the left control stick down, and the drone will slowly lower into a soft landing.

However, the Phoenix HD doesn't have GPS or automatic-shooting modes, so you can't navigate on a map or do one-touch shots like orbits or boomerangs, as with pricier drones such as the DJI Spark. That also means that the drone is less effective at hovering in place than more expensive models: without GPS, the drone can't keep to one spot in a strong breeze. And as a larger drone with less powerful motors than some, the Phoenix HD is rather prone to getting blown around.

The Phoenix captures fairly good quality video at 720P resolution (1280 by 720 pixels, 30 frames per second). Its camera is mounted on a two-axis gimbal, so it can tilt (forward/back) and roll (rotate left/right) to compensate for the drone's movement. Video from the Phoenix is more stable than that of similarly priced drones, such as the Sky Viper V950, that lack gimbals.

One  issue is that the Phoenix's front rotor blades are occasionally visible in shots. As the drone maneuvers (and the gimbal tilts and rolls to compensate), the blades appear and disappear in the top left and right corners of the video frame.

MORE: Which DJI Drone Is Right for You?

I also found that the microSD card slot on the base of the camera wasn't very secure: wice  the memory card popped out and vanished into the undergrowth after a hard landing. I finally  had to put a small piece of gaffer tape over the memory card to hold it in place.

The large battery that slides into the back of the case gives you between 15 and 18 minutes of flight time. Zoopa does not offer a spare battery for this model, but the battery inside the customized case is a standard 7.4V 2600mAh 20C LiPo battery that you can buy for about $30. So, while there are no official spare batteries available, you could acquire your own without too much of an added expense.

The Phoenix HD comes with a spare set of propellor blades. To replace the blades, you simply unscrew a thumbscrew (it's easily removed without tools), then the old propellor lifts off. Pop the new one into place, put the thumbscrew back on, and you are good to go.

At just $149, the Phoenix HD offers a lot of features for the price. Although it can only shoot at a max of 720p resolution, its two-axis gimbal makes the video a lot more smooth and stable than other drones in this range.

The Phoenix HD is not perfect, though; the rotors are occasionally visible in videos, and you'll want to secure the microSD card slot with some tape. Still, the Phoenix is good for someone who wants to begin making drone videos, but who doesn't have the budget for more expensive drones like the Parrot Anafi or Mavic Air.