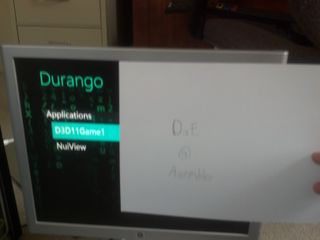 With videogame convention season underway with PAX East, it's rather unsurprising to see the rumors regarding Microsoft's next-gen console ramp up with renewed vigor.

VGLeaks, the same outlet that had leaked Durango's technical specifications, has published screenshots of the Xbox Development Kit (XDK). One of the screenshots is a Hardware Overview note to developers, which discusses Durango's different power states. "The console will be ready instantly when users want to play," it reads, "and will always maintain a network connection so that console software and games are always current. With this 'Always On, Always Connected' design, users will quickly and easily enjoy their connected experiences, with no waiting for the console to restart or install games."

What's left unwritten is that this "Always On, Always Connected" design could mean the Durango would block pre-owned games, as has been previously rumored. The document further goes on to specify that while the Durango's hard drive capacity is still left undetermined—perhaps it'll be of variable size, as with the Xbox 360—it "will be large enough, however, to load a large number of games. All games will be installed on the hard drive. Play from the optical disc will not be supported." Essentially, though the Durango will have a blu-ray drive and physical games will still be available for purchase, the physical discs will immediately become useless once the game's been installed. It doesn't take a mental leap to imagine that each copy of the game would be tied to a product key that would need to be redeemed in order to install the game to the hard drive, making the disc worthless to resell.

Keep in mind though, none of this information has been verified. It could be possible that these screenshots are no longer accurate to the vision that Microsoft has for Project Durango. We can only know for sure when Microsoft finally decides to announce, hopefully, at this year's E3.

The image of the Durango Hardware Overview is courtesy of VGLeaks.