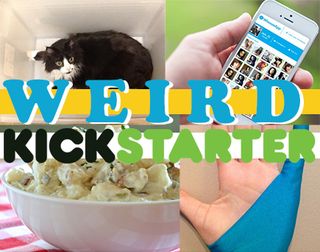 Kickstarter has had a mixed history of projects. Over the last five years, the site has raised more than $1 billion for 69,000 successful projects. Many of these were innovative tech projects such as the Pebble Watch and Oculus Rift. Others projects were proposed by scandalous swindlers, such as the creators of the Kreyos watch, who used the excess funding to buy a Ferrari and never released the watch. In between these two extremes, there are projects that are weird attempts at creating things we would never think people would pay money for. Here are the weirdest Kickstarters we could find.

Earlier this year, Zack Danger Brown started a Kickstarter campaign, asking people for $10 so he could make potato salad. Plain, old potato salad. Brown raised more than $1,000 before Buzzfeed featured him in an interview. News outlets and viral sites quickly picked up the story, and turned Brown's simple quest for potato salad into a viral fad. By the end of the campaign, Brown had raised more than $55,000. However, instead of making a lot of potato salad for himself, Brown is using a significant portion of his funding to combat homelessness in Central Ohio. Backers will also have the chance to attend Potato Stock on September 27, 2014, in Columbus, Ohio, where they'll all get a taste of the potato salad they helped fund. So, next time you think your Kickstarter won't work, just tell yourself, "Well, it worked for Zack Danger Brown."

Brian Kent woke up one day and thought, "I wonder what the last human invention would look like." Its name is Tucker and it is a thought device, Kent said. "It can solve any problem that a human can pose it, using the collective mass of all the knowledge of the people who use it. It implements the pieces we have already been playing with for some time —computers, the Internet, electrical power, and our minds (including both intelligence and wisdom) — and it combines them in a way somewhat unlike any of us has thought up before," he said.The nonsensical description goes on.

Kent's funding goal is $1, and he has received $2 from two backers in 25 days. It's hard to tell if Kent is serious, or if this campaign is a joke. In the past, he used Kickstarter to raise more than $13,000 for a Louisiana-based political documentary.

Nicholas Homan is not a fan of Corgis. However, everyone else thinks those small herding dogs are awesome. In order to prove them wrong, Homan wants to create a website that will gather videos of Corgis acting horribly, so he can prove to the world that "Corgis are assholes." Homan's campaign ended on August 22, and he was only able to raise $1. Similar sites like Animalsbeingdicks.com already exist to share GIFs and videos of animals being horrible. But how could such a "truth-driven" project not receive the necessary funding? Maybe it was the Corgi Illuminati.

In 2013, GIF creator Steve Wilhite dropped a bomb on the tech community: His GIF file format should be pronounced as "jif." Many people on the Internet did not agree. Many tried to prove that "gif" was the proper pronunciation. And the debate has gone on with no signs of a fully objective answer. Scott Sackville is looking to fix that. He's hoping to create a site where users can vote on the proper pronunciation. He was able to raise more than $150 from 30-plus backers on Kickstarter to start this site. There's no telling if/when the site will ever actually launch or settle anything. For now, we're just going to sit over here and yell "jif" at the top of our lungs.

One thing all left-handed artists must contend with is ink-smudged hands. But the solution to this messy little problem may be at hand. Mary-Anne O'Connell-Pope has created the "Southpaw Protector," a small glove that covers the bottom half of the left hand and protects lefties from smudging up their handwriting and from leaving stains. O'Connell-Pope received more than $200 for the project. We can certainly see how many artists and writers would be attracted to this idea, but it seems so biased toward left handers. She's a Leftist!

Wet Diapers are the worst; just ask any toddler. It's not fun. Sadly, those minihumans can't exactly stand up and demand to be changed. Engineer Eric Schul has invented a new sensor to check, so you don't have to. Users touch the sensor to the wet diaper. If the diaper is wet, electricity will transfer to and from the diaper, and activate the light. More than 600 backers have provided more than $12,000 on Kickstarter for the project.

Night owls and insomniacs know that, while they're ready to chat at 2 a.m., not everyone else is up. Whoozeapp may be just the thing for you. It's an app, invented by Netherlander Nurija Museljic Masic, that lets users log in between midnight and 6:00 a.m. There, they can chat with anyone who is using the app in their region. However, once 6:00 a.m. hits, the conversation is deleted. Masic hopes to raise more than $35,000 via Kickstarter to create the app. We love the absurd concept of Whoozeapp, but the creator's lack of background and training makes us skeptical.

Are you tired of the modern dating scene? Would you like something fresh? Here's an alternative: a bear-dating simulator. According to her Kickstarter page, Toni Rocca (of Gaymerx) once thought, "Man, I wish there was a game where I flirted with adorable bears." According to Rocca, the Bear Senpai Date Simulator will be really quirky. It will only have flirtingin it, and no sex scenes (lest someone declare her a proponent of bestiality). There is already a pigeon dating simulator on Steam, so clearly there's a demand for this type of app.