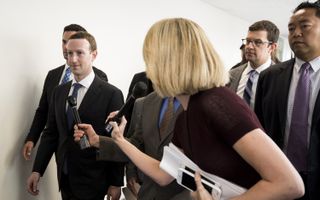 This week, Mark Zuckerberg goes to Washington, and you can stream his testimony live online.

The trip to the nation's capital is the latest stop on the Facebook CEO's apology tour. Zuckerberg is looking to calm lawmakers, who will be grilling the young exec about the Cambridge Analytica scandal, wherein that company acquired the harvested Facebook user data of 87 million people.

MORE: How to Protect Yourself if Cambridge Analytica Has Your Facebook Data

The first of Zuckerberg's live testimonies is being made to a joint hearing of two Senate committees: the Senate Judiciary Committee and the Senate Committee on Commerce, Science and Transportation. It begins today (April 10) at 2:15 PM Eastern (11:15 AM Pacific) and you can watch it here.

Tomorrow (April 11), Zuckerberg will speak to the House Committee on Energy and Commerce, an appearance that will include a statement pre-released by the House. This appearance begins at 10 AM Eastern (7 AM Pacific) and will be streamed here. You can also watch both sessions live on C-SPAN.

In that statement, Zuckerberg takes some of the blame for the misuse of data, stating "We didn't take a broad enough view of our responsibility, and that was a big mistake. It was my mistake, and I'm sorry." Later, though, he does spread the blame to Aleksandr Kogan, the Russian-American researcher behind the 'This Is Your Digital Life' app, which harvested the Facebook user data, which was then used by Cambridge Analytica.

Yesterday (April 9) Facebook began notifying the 87 million users whose accounts were accessed by the 'This Is Your Digital Life' website. If Facebook tells you you're affected, or you're looking to take more control over your data, check out the links below for our comprehensive guide to protecting your privacy.