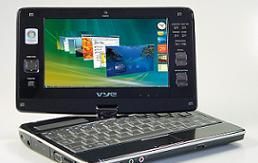 Not Just Another Sub-Notebook

Like the Eee PC and several UMPC models, the mini-v has a 7” screen in a 10” case, to keep the price down and make room for the keyboard. Vye tucks the speakers under the screen hinge, and uses the extra space around the screen for a selection of navigation buttons and other controls-these come in handy when you swivel the screen around and fold it down over the keyboard in tablet mode. There’s a track point for moving the mouse, a four-way pad for moving up, down and side to side, left and right mouse buttons, up and down scroll buttons, a launcher that you can customize with a couple of favorite applications, and an Enter key. These controls mean you can manage just about any application without pulling out the stylus or even tapping your finger on the screen.

Navigation and launch buttons fill the sides of the mini-v’s screen.

Like most UMPCs, but unlike most tablet PCs, the mini-V has a passive touch screen; that means you don’t need a special pen when you do want to use touch. The stylus is small and thin and looks as if it belongs with a PDA. Using a finger works very well with interfaces that have large buttons, like Vista Media Center, where you can tap your way through music and photos. Vista also tries to make finger touch work better, by putting an icon of a mouse on screen that you can drag into place more precisely.

The touch screen on the mini-v flips around to turn it into a tablet.

The screen was poorly calibrated out of the box, so it was impossible to tap items in the taskbar and on the menu bar of maximized programs accurately. After calibrating with the PenMount control panel, though, we had no further problems and the whole screen was accessible. Unfortunately, this didn’t fix all the issues with writing on screen. Ink strokes are surprisingly smooth for a passive touch screen, but the screen driver doesn’t have the kind of blunt touch blocking found in UMPCs like the TabletKiosk; this means that if you rest your hand on the screen while you’re writing, your palm draws random lines all over the page. The screen bezel isn’t wide enough to rest your hand upon, and you can’t comfortably rest your hand on the battery either, because it’s lower than the bezel.

Blunt touch blocking is a software issue rather than a hardware issue-when the screen detects the touch of a stylus point, it increases the amount of pressure required to ink on screen, so the light touch of your hand doesn’t register as inking. This means that a future driver update might improve the writing experience.

Although you can write smoothly on the mini-v screen, resting your hand on the screen as you write produces extraneous lines.

The extra layer needed in a passive touch screen always degrades screen quality, but you don’t notice that on the mini-v. Even at the lowest brightness setting, the screen is clear and colorful, whether you’re reading a document or watching a movie.

The screen doesn’t rotate automatically when you put it in tablet mode, but the rotate button next to the screen steps through all four orientations. You can also control the brightness and snap rather grainy images with the built-in Webcam from here-the quality is just about acceptable for video chat.