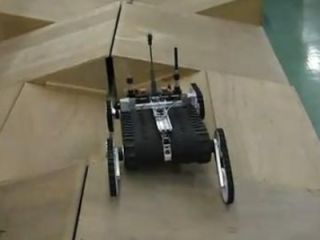 If there's one thing we can be thankful for, it's that robots haven't completely mastered bipedal movement. Sure, Asimo and the rest of his horde can walk, but they sure as hell don't have the same ability we have to traverse obstacles. They'd be unstoppable otherwise.

That just won't do for the Japanese people. Having long consigned themselves to our future robot overlords, they can do nothing continue to make sure that the rest of us free humans have no chance against the impending revolution. So after realizing that legs aren't mobile enough, and tank treads have limits to their off-road abilities, they've decided to put two and two together and create a robot with tank treads for legs.

This prototype is dubbed the Search Robot Quince, most likely after its main role of searching for and destroying renegade organics. As for Quince? It's probably a bad translation of the English word used to describe a face going sour, especially after realizing that the robot sporting way too many tank treads will be relentlessly pursuing you, no matter where you run to. (But then again, our Japanese is a bit rusty).