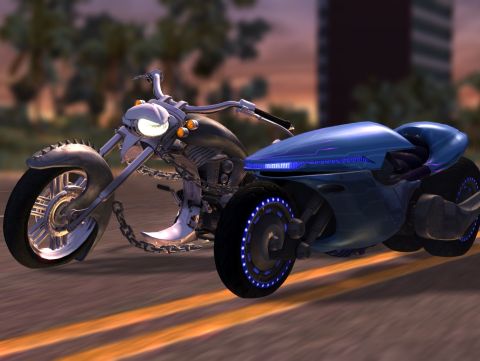 "LocoCycle" tries to embrace the "so bad, it's good" school of campy game design, but lacks the heart and conviction necessary to do so.

Citizens of Scottsburg, Ind.: the games industry owes you an apology.

"LocoCycle" tells the tale of a free-spirited, sentient motorcycle and a hapless mechanic, both on their way to your fair city. Given how shoddy the game is, you'll wish they had ventured somewhere else.

Launch-day titles are rarely the best games a system ultimately has to offer, but "LocoCycle" is not only a bad launch title for the Xbox One — it's a bad game all around. The gameplay is repetitive, simplistic and difficult to control, the story is brainless, the characters are joyless and the attempted humor comes off as racist.

"LocoCycle" tries to embrace the "so bad, it's good" school of campy game design, but lacks the heart and conviction necessary to transcend its own stupidity.

You'll take control of an ever-moving motorcycle, but "LocoCycle" is neither a racing game nor a rail shooter. It's something of a vehicular combat simulator, although the vehicle is obnoxious and the combat is not nearly over-the-top enough to evoke the jubilant mayhem associated with the genre.

You play as I.R.I.S., an intelligent motorcycle who develops an unquenchable love for the open road after a well-placed lightning zap. She (literally) drags along Pablo, an unassuming mechanic whose foot gets stuck on her in some unfathomable way. This lets her drag him from Mexico to Indiana without pulling his foot off or skinning him alive.

As I.R.I.S. traverses the great highways of North America, she'll move forward at a steady, speedy clip, although even the slightest touch of the analog stick will send her careening off in either direction. A "turbo" mode that lets her accelerate is admittedly helpful in reaching timed objectives, but only exacerbates how loose and hypersensitive the controls feel.

Along the way, baddies of every stripe pursue I.R.I.S. and Pablo — cars with machine gunners leaning out the window, jetpack soldiers, trucks bearing bazooka-wielding men in black, bikers with axes and, of course, another sentient motorcycle, this one named S.P.I.K.E.

Fighting these enemies is occasionally functional, but it's never fun. I.R.I.S. can swing her front wheel to attack foes in front of her and sweep Pablo across the road to take them down in the rear. She can also leap into the air indefinitely to confront flying enemies, or use twin guns to down distant targets.

The combat is extremely simplistic, and gets dull within seconds. Enemies have a ton of health, but while I.R.I.S. whittles away at them, they rarely pose any kind of threat. Get close to soldiers and get in a melee with them; keep your distance from vehicles and keep shooting. There's no strategy and just a few reflexes involved.

Boss fights break up the tedium somewhat, although the game does not play by its own rules in these infuriating segments. Even if a boss has a health bar, depleting the bar will do nothing; the boss will continue attacking and dodging just as before, until the plot dictates otherwise.

The tragedy of the story in "LocoCycle" is that it absolutely could have worked as a goofy cheeseball comedy. In the near future, an arms dealer creates sentient motorcycles to duke it out for wealthy world dictators. After blue motorcycle I.R.I.S. suffers a malfunction, she and Pablo, her mechanic, embark on a road trip that will take them from Mexico to a biker rally in Indiana, fighting off her manufacturer's goons at every turn.

"LocoCycle" lacks the sincerity to really commit to its jokey premise. Pablo spends most of the game screaming in Spanish, which I.R.I.S. blithely ignores as she spouts platitudes about life on the road and quotes from much, much more entertaining media (predictable lines from "Back to the Future" and "Men in Black" are present and accounted for).

MORE: Xbox One, PS4 Scams Pop Up on Facebook

The game also teeters on the line between parody and racism for a few minutes — before careening right over it. The introductory cut scene depicts a North Korean despot so effeminate that he's actually played by a woman, a Soviet dictator (the USSR has reformed, because of course it has) bedecked in medals and spoiling for a fight, and a fat, oblivious African warlord covered from head to toe in bling.