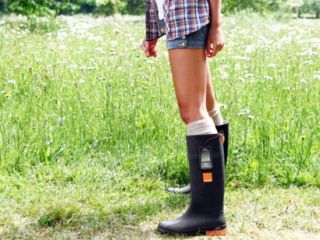 We've never had the pleasure of attending this year's Glastonbury Festival. But if we ever make the trip to the Pilton, we may never have to worry about gadget battery life spans.

That's because a partnership between telco Orange and renewable-energy company Gotwind has resulted in the Power Wellies, a pair of rubber boots that generates portable power from thermoelectricity. A bunch of thermoelectric modules embedded into the sole of each boot create electric voltage from temperature differences.

These modules are sandwiched between your warm feet and the cold, dead ground. So the Power Wellies shouldn't have too much difficulty creating some juice for your gadgets. Once the internal batteries have stored enough, the user can then plug in via the cord stored near the top. After all, nothing's more important than broadcasting updates through your phone and taking pictures of the event, right?

Potential applications of the Power Wellies shouldn't be limited to the festival atmosphere however. No doubt the Power Wellies (apparently short for "Wellingtons") would be great for rainy city commuters. So let's wait until Orange comes out with information regarding a general retail release—and hope that the telco is planning such a thing.