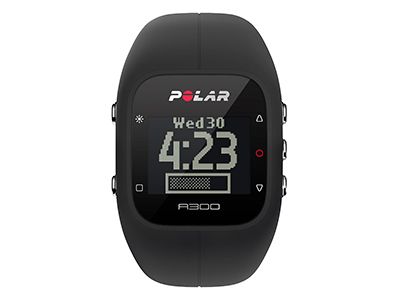 The Polar A300 provides accurate fitness tracking in a watch-style design, but we wish it offered more features for the price.

Polar is no stranger to fitness tracking, and its A300 wants to be your workout companion as well as your regular watch. It monitors daily steps, calories and distance, with a number of dedicated exercises to track — all in a waterproof wristband that offers superlong battery life. The A300 does the basics right, but for $139, I'd like to see more features.

The A300 tracks your steps, distance and burned calories, and it comes with an inactivity alert to keep you moving. However, the A300 doesn't have a built-in heart-rate monitor like the Fitbit Charge HR, nor does it have smartphone notifications like the Garmin Vivosmart. You can, however, buy a separate Polar heart-rate monitor to use with the A300, or buy the $179 bundle, which includes the chest strap.

Like the Fitbit Charge HR and the Garmin Vivosmart, the A300 tracks sleep, and you can set a wake-up alarm in Settings. Plus, the A300 automatically knows when you've fallen asleep, making it that much easier to set it and forget it. I set my alarm to go off at 6 a.m. from Monday to Friday, and the device did a good job of buzzing and beeping to shake me awake.

The Polar A300 looks very similar to the company's GPS-enabled M400. When it needs to be charged, you can pop out the squarish body from its thick silicone wristband. Polar offers the band in five colors: white, pink, yellow, gray and blue.

I like that the device has an always-on watch face — the Fitbit Charge HR and Garmin Vivoactive, in contrast, turn on only when you tap their displays. In addition to displaying the time and the date, the A300 shows you how close you are to meeting your daily activity goal. On the right side is a Select button flanked by up and down arrow buttons, and on the left are controls for the backlight, and a back button.

I was pleasantly surprised by the A300's superbright blue backlight, which makes the display easy to read in all sorts of conditions. Other trackers, such as the Garmin Forerunner 15, have dim backlights that don't do much for visibility unless you're in a pitch-black room.

The A300 is water-resistant up to 30 meters, so you can use it to track swimming. However, the texture of the band and the size of the device (1.4 inches wide, 1.7 ounces) make it clunky as an everyday watch. Both the $149 Fitbit Charge HR (0.83 inches wide) and the $145 Garmin Vivosmart (0.14-inches, 0.67 ounces) have slimmer, minimalist designs that will fit in with whatever you wear, from morning to night.

The Polar A300 is a bit more cumbersome to set up than other fitness trackers. Unlike with most other trackers, you must first download the software — in this case, Polar FlowSync — to your computer (Mac or Windows) and then connect the A300 to your PC via USB. If you haven't already created a Polar account, you will be asked to do so. Once the device is updated and synced, it's ready to use. The whole process took about 5 minutes, but I wish you could just use the Polar Flow phone app for setup.

Navigating the A300's interface was simple. Polar also makes it easy to record a workout: Just press the Select button on the home screen, and choose an activity to track. The list is diverse, and includes swimming, running, cycling, Pilates, and general indoor or outdoor modes.

Scrolling down with the arrow buttons lets you see Activity, History, Settings and Fitness Test. Activity shows you a progress bar of how active you've been that day, and pressing the Select button shows stats, including active time, steps, distance and calories.

The A300 also has a screen called "To go," which gives you activity options to reach your daily goal. I really enjoyed this feature because, on the days when I was supermotivated, I could press a few buttons and know that I could reach my goal just by walking 1 hour and 8 minutes, or by jogging 38 minutes, for example.

The History page shows you all your past workouts, and you can press the Select button on any of them to see a deeper breakdown. The Settings page lets you customize the watch's presets, as well as notifications during workouts and your personal information.

The Polar A300 tracked my steps accurately for the most part, counting 118 steps when I walked 100 steps on the treadmill. It also nearly perfectly captured my distance from walks and runs in the gym and outdoors. The A300 can store up to 60 days' worth of activity tracking, which includes 1 hour per day of active workout monitoring.

In the Polar Flow app, you can look back at those sessions in your Training Diary, where it shows you the duration, calories burned, percentage of fat burned and your workout's intensity.

Polar is a little more basic when it comes to sleep tracking; it monitors the total number of hours you slept, and breaks that down by hours in restful versus restless sleep.

Polar Flow is where your activity data lives, online and in a mobile app for Android and iOS. I often defaulted to the online dashboard because it automatically pops up after you sync the A300 to a computer.

Initially, the dashboard shows you a monthly timeline of your activity, with a bar graph displaying the amount of time you spend in certain activity levels. That means you'll see how long you were sitting down each day versus how long you were walking, running or leisurely strolling down the street.

Directly below that are more stats, including a summary of your activity with active time, steps and distance, your total activity score, and a percentage that shows how often you reached your activity goal. Here, you can also see a training summary, which breaks down stats for your tracked exercises, including heart-rate zones (if you've connected a Polar heart-rate monitor).

You'll find the same data in the Polar Flow mobile app, but designed for a smaller display. The home screen forfeits a bar graph for a clock dial showing how active you were during different hours of the day. You can change the home screen to show daily, weekly or monthly graphs of your activity by tapping the calendar icon on the top right.

From the app's menu, you can see your Training Diary, notifications from Polar and Settings. You'll likely spend the most time in the Training Diary, which breaks down all the past activities you've tracked and presents them in a weekly view format.

However, you do have to manually sync the device to the app, which is a slight inconvenience. When you want to sync, you open the app on your smartphone, and then press and hold the device's back button, which starts the process. I would prefer the A300 to automatically sync with the Flow app when it's opened, like the Fitbit Charge HR does with its app.

Polar promises four weeks of battery life with the A300 activity tracker. That's much better than the Fitbit Charge HR's five-day battery life, and better than the Garmin Vivosmart's weeklong life span. After charging it fully from my computer via USB, I wore the A300 for four days and barely noticed a dent in its battery symbol.

The $139 Polar A300 succeeds as a daily activity tracker and a capable workout watch. Its display is always on, its fitness monitoring is accurate, it lets you track a number of specific activities and it goes in-depth with the stats it records. People who already have a regular exercise routine will like the A300 as a device to push them to the next level.

However, the A300 is too bulky to wear all day long, unlike the $149 Fitbit Charge HR, which has similar features and includes an embedded heart-rate monitor. The $149 Garmin Vivosmart offers the same features and smartphone notifications as well. But if you're looking for a dedicated fitness watch to wear while you work out, the Polar A300 is a solid choice.