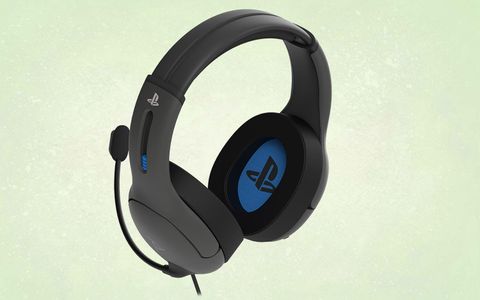 The PDP LVL50 Wired Stereo Headset provides decent gaming sound for a fair price, but you can get much better features from similar gadgets.

There's a fine line between "inexpensive" and "cheap" when it comes to gaming peripherals, and the PDP LVL50 Wired Stereo Headset is ever so slightly on the wrong side of it. The peripheral costs only $50, and the sound quality is solid for the price. But the headset looks plain, feels uncomfortable and has a subpar mic.

If $50 is your absolute cap for a gaming headset, the LVL50 will indeed get you private listening and a dedicated mic for your late-night PS4 or Xbox One sessions. However, you can get much better features from other gadgets if you're willing to stretch your budget by even $10.

The LVL50 sports a gray plastic chassis with either a PS4 or Xbox logo up near the headband, depending on which version you get. Mechanically, the two models are identical; there are just some aesthetic and color variations. There's a flexible boom mic on the left ear cup and a volume dial on the right ear cup. The headset connects via a single 3.5 mm audio jack. That's pretty much all there is to it.

While you arguably don't need much more for a console-centric headset, a few more features would have been helpful. Even in this price range, many headsets come with mic/audio splitters for PC play, and there's no mic-mute button. If you want to mute the mic, you have to rotate the boom back up, which can be pretty obnoxious if you need both hands for a heated multiplayer match.

The LVL50 could have been much more comfortable. The foam ear cups have a fair amount of give, and you can wear them for a few hours at a time, even with glasses. But the arms that hold the ear cups in place are totally rigid, meaning they will never swivel to make a snug seal over your ears. It also means you can't fold the headset flat for transportation.

Rather than sporting an elastic band or rigid notches, the LVL50 has adjustable arms that you can simply slide to fit your head. While this is a smooth, simple process, it does mean that it's very difficult to find a perfect fit again if the headset gets knocked askew, or if you hand it off to someone else. I found that the LVL50 always exerted a little too much pressure behind my ears. While the fit wasn't exactly painful, it wasn't all that pleasant, either.

A co-worker also spent some time with the LVL50, and he found it comfortable overall. However, he would have preferred the ear cups to be plusher and the overall fit more precise.

In Nier: Automata, the LVL50 provided a respectable balance between the pumping synth soundtrack, the over-the-top dialogue and the futuristic sound effects.

I tested the LVL50 on PS4, Xbox One and PC titles, and the performance was good — albeit not great — across the board.

Because the LVL50 is designed specifically with one console or the other in mind, I spent most of my time running it through PS4 and Xbox One games. In Nier: Automata, the LVL50 provided a respectable balance between the pumping synth soundtrack, the over-the-top dialogue and the futuristic sound effects. The headset definitely favored midrange frequencies, though, putting the dialogue front and center, sometimes to the detriment of the music.

Things were a little more balanced in Guacamelee! Super Turbo Championship Edition, since there's no spoken dialogue in the game. There, I enjoyed an excellent balance of music and sound effects, although there's no denying that the LVL50 is simply not as rich or as deep as more expensive headphones.

The soundscape was simple and flat, focused on delivering clear audio rather than nuanced audio. There was never any question that I was wearing an inexpensive pair of headphones instead of being surrounded by an excellent set of speakers. (As audiophiles can attest, a really good headset can accomplish this feat.)

The headset was similarly adequate for competitive games like Destiny 2 and Overwatch, where directional sound is vital to victory. If you need a headset that gets the job done across a wide variety of genres, the LVL50 is fine. If you need a headset that excels at delivering cinematic music, immersive sound effects and crystal-clear voices, however, it's a tougher recommendation.

MORE: 10 Cheap Gaming Headsets (Under $60) Ranked from Best to Worst

The mic itself is not great. When I talked with co-workers on a video call, they said my voice came through very quietly and with a ton of echo. On a PS4, I had slightly better luck with chat and voice commands, but it's definitely geared toward everyday multiplayer chatter rather than tournament-grade precision.

While you could theoretically use the LVL50 as a music headset thanks to its dead-simple 3.5 mm connection, you wouldn't really want to. In addition to having an inflexible design and nonremovable mic, the LVL50 sounds pretty bland for music. Its reliance on midrange frequencies lets vocals shine through clearly but at the expense of bass line, rhythm lines and highs.

When I talked with co-workers on a video call, they said my voice came through very quietly and with a ton of echo.

I listened to pieces from Flogging Molly, Old Crow Medicine Show, The Rolling Stones and G. F. Handel, and everything sounded a bit mixed and muddy. The harmonies in "Let All the Angels of God Worship Him" sounded like they were coming through a decent pair of cellphone speakers, and the thumping bass in "Carry Me Back to Virginia" sounded distant and dull. However, the directionality of the sound in right/left recordings like "Let It Bleed" was pretty good.

The PDP LVL50 delivers fine gaming sound for a $50 console headset. But everything else about it, from its shrug-worthy appearance to its subpar mic, makes it a comparatively tough sell.

For an entry-level gaming headset, you could do worse. But the $50 HyperX Cloud Stinger is more comfortable, the $60 Roccat Renga Boost has much better sound and the $70 SteelSeries Arctis 3 is still one of the best budget gaming headsets you can buy. (If you can spare $80, the LVL50's wireless counterpart is also a much stronger product.) Saving money is always a good idea, but buying a superior product is usually a better one.