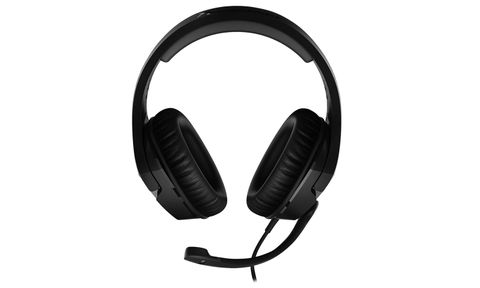 The Kingston HyperX Cloud Stinger is a mildly stylish and extremely comfortable gaming headset, but the audio is nothing special.

Aside from the occasional home run, budget products tend to come in only two flavors: "what a waste" and "meh, good enough." The Kingston HyperX Cloud Stinger ($50) falls squarely into the latter category — and for the price, that's OK.

This black-and-red gaming headset is mildly stylish and extremely comfortable, with an easy setup process. But because its sound quality is thoroughly underwhelming, for both games and music, audiophiles will probably need to look elsewhere. If you need a gaming headset that does just what it promises, with no tweaking necessary, the Cloud Stinger is at least a reliable starting point.

The best way to describe the Cloud Stinger is plain. The entire headset is black, save for a red HyperX logo on each ear cup. The device is neither as obnoxiously large as the Logitech G933 Artemis Spectrum nor as small and streamlined as the LucidSound LS30. On the plus side, the ear cups fold flat, so you could stash these in your bag and wear them on the subway without too much of a fuss.

The over-the-ear cups themselves are made of a breathable foam material that is extremely comfortable to wear, even for hours on end. An adjustable microphone sits on the left ear cup; you can move it up and down on an arm, but it's not bendable. Just below the right ear cup, there's a simple volume-control slider. There's a generous amount of foam padding on the headband. Neither ambitious nor ugly, it very much looks the part of a budget gaming headset.

At least the Cloud Stinger is easy to connect. By default, it connects via a 3.5-mm audio jack, but you can also attach it to a splitter (included) for discrete microphone and audio streams on a gaming rig. I didn't notice any significant difference in audio quality between the two, and the mic does indeed work with or without the splitter. Still, it's a nice option, and the cord is long enough to attach comfortably to a desktop, laptop or controller.

One thing the Cloud Stinger has going for it is that it's extremely comfortable to wear, even over long periods of time. I played games like The Witcher 3 and Overwatch for long stretches, and wore the Cloud Stinger to listen to music at work for even longer. My ears felt fine, even while wearing glasses the whole time.

I handed the peripheral over to a co-worker; he said that, while the ear cups didn't make a perfect seal, he also found it more than comfortable enough to wear for long stretches.

To gauge how well the Cloud Stinger performed in everyday gaming scenarios, I tried it extensively with two radically different games: The Witcher 3: Wild Hunt, to see how it handled cinematic adventures, and Overwatch, to determine whether it could give me a fast-paced, competitive edge. The peripheral works in both cases, but both experiences felt somewhat flat and joyless.

The Witcher 3 was worse than Overwatch. The Witcher 3 is a long, story-driven quest that's equally dependent on dialogue, sound effects and music. As such, faithful sound is incredibly important, especially if you plan to sit down and play for a few hours. Unfortunately, all of the dialogue sounded wooden, while the music felt brassy and distant. The sound wasn't garbled, but I'd take a decent set of speakers or comparably priced music headphones over the Cloud Stinger any day.

Overwatch fared a little better. That's good news because, with this game, a headset with a microphone is almost a necessity. While the sound isn't any better per se, it's more focused. In Overwatch, listening to your opponents is of key importance, and I heard sound effects and voice work clearly and directionally. There was no real depth to the sound, but I could hear where the action was taking place, and that should be fine for anything below a hard-core competitive level.

I wouldn't listen to music with the Cloud Stinger unless I had no other choice. When tested with a variety of genres — from rock, to bluegrass, to baroque, to punk — it produced bland, lifeless sound. Aside from some distortion at higher volumes, there was no real problem with it — no hissing, fuzziness or anything to get in the way — but it's a rather joyless way to hear all that a track has to offer.

To test the Cloud Stinger, I paid special attention to selections from G.F. Handel's "Messiah," as well as "The Hand of John L. Sullivan" by Flogging Molly, "Carry Me Back" by Old Crow Medicine Show and "Sweet Virginia" by The Rolling Stones. The choral selections lacked the richness necessary to highlight the interplay between various parts. High- and low-pitched instruments were tough to hear on the more modern pieces, leaving me with guitars and vocals, and not much else.

I should reiterate that nothing sounded bad. But if you take music seriously, you'll need either a separate pair of headphones or a different gaming headset altogether.

Aside from the aforementioned splitter and volume slider, the Cloud Stinger is admirably light on features. It's not a USB headset, so there's no software to grapple with. For better or worse, there's no external amp. The microphone mutes automatically when you slide it all the way up, which is a nice touch.

The microphone itself is passable. I tried it out with Windows Sound Recorder to see what the playback sounded like, and while I wasn't impressed, I found it's good enough for casual online play or Skype conversations. There was a bit of a background hum, and my voice sounded filtered and a little muddled, as though I had a cold. The volume was reasonable, though, and all of my words were perfectly understandable.

For $50, you can't expect the moon and stars in a gaming headset; you just want something competent and comfortable. In those respects, the Cloud Stinger delivers. The gaming and music performance won't leave you in aural awe, but they're clear and loud enough to get the job done for both single- and multiplayer titles.

Part of what makes the Cloud Stinger attractive is that there's just not a whole lot of name-brand competition in this price range. Superior models from Logitech, SteelSeries and even Kingston itself tend to hover around the $75 range — and if audio quality is a major concern, you should definitely begin your search at that price. Otherwise, the Cloud Stinger is easy to wear and does what it promises, and for $50, that's probably enough.