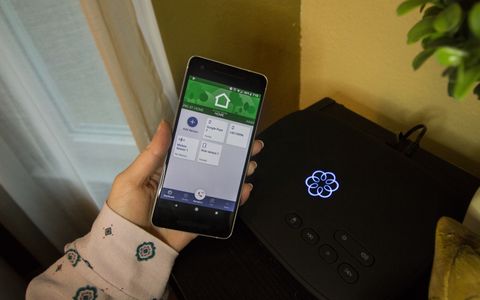 Ooma's home security system is inexpensive and easy to use.

If you're looking for a DIY home security system you can set up yourself, it doesn't get simpler than this.

For $130, the Ooma Home Security Starter Kit monitors your house and offers quick access to emergency services through its user-friendly mobile app. Its accessories are relatively affordable and include smoke detectors, motion sensors, a streaming-video camera and a loud siren.

However, there's not much support for home automation or much integration with third-party devices, and to use some features, such as remote 911 and notifications, it costs an extra $5.99 per month. But if you don't need those features, Ooma is an affordable option.

Ooma started out as a home voice over Internet Protocol (VoIP) service, so it's no surprise that the hub of the Ooma Home Security Starter kit is its Telo VoIP hub. Also included are a motion sensor, a door/window sensor and a water sensor.

There's nothing particularly exemplary about the Telo's design. It resembles an answering machine (if you remember what those look like), and it even has fast-forward and rewind buttons. It's not exactly the kind of high-tech product that goes on display in your bookcase; but it is the brains of this operation, so it should be placed somewhere accessible.

The setup is pretty straightforward. Right as you open the box, there's a sticker on the Telo hub itself directing you to register for a phone number through the Ooma Telo app for Android or iOS. Once that's configured, you can plug in the hub to your router via Ethernet, or pair it with your Wi-Fi network using the app.

If you decide you want to use the Telo for phone calls, you can connect something like the Ooma HD2 Handset with video calling (sold separately for $30), or any other standard telephone handset.

When the Telo is up and running, you can download the Ooma Home Security app to log in to your new phone number and start adding accessories, each of which comes with a set of AAA alkaline batteries. After each device is powered up, you can tap on the option to add a new device to your home network, and the app will begin to walk you through the pairing process.

Toward the end of the setup process, the app will ask you to choose how each accessory should function in various modes. I like that this is asked explicitly during installation so that you know how each device functions without having to dig into the settings panel later on.

Ooma offers additional door sensors and motion sensors for $25 and $35 a piece on its website.A garage door sensor ($40) and a water sensor ($30) are also available, and a siren ($40) and smoke alarm ($60) are coming soon. And if you want to add cameras to the mix, check out the recently launched Butterfleye wireless security camera, available with 16GB or 32GB of storage for $200 and $250, respectively.

Since we first reviewed Ooma, the company has added professional monitoring as an optional feature for $14.99 per month, bringing it more in line with other DIY home security systems such as Abode, SimpliSafe and ADT. However, this service is not available in California, Texas, Florida, Virginia, Arizona, Tennessee, Maryland, Alabama, Arkansas, Rhode Island, Montana, and the District of Columbia.

Although you don't have to pay monthly for all of Ooma's key features, you have to sign up for the $5.99-a-month subscription service if you want access to things such as remote 911 calling, mode switching based on your phone's location and remote phone call notifications.

If you opt for the $10-a-month Premier telephone service for the Telo, which adds features such as voicemail, the security subscription is only $3.99 a month.

You don't have to pay the monthly subscription price to use the app to call 911 if you opt to receive a phone call when the sensors are triggered. It's not as quick to alert you as the other systems we tested, but once you receive a call saying there's something going on at home, you can press 1 to be connected with local operators.

The Ooma Home Security Starter Kit revolves around the VoIP experience, so it works a bit differently than other DIY setups. The Telo acts as a base and offers friendly voice prompts every time you make a status change or an accessory like a motion sensor detects movement, but there is no built-in siren available — in fact, that particular attachment won't be available until later this summer.

Most of the interaction you'll have with the system is through the Ooma Home Security app, which offers an at-a-glance look at everything that's going on, including whether devices are working and whether doors and windows are opened or closed. Because there is no physical keypad, you'll have to manually turn on the system through the app or schedule it so that it's armed at the same time every day.

There's a beta geolocation feature that turns on monitoring once your mobile device leaves the house. It can be set up with multiple mobile devices, even those that don't belong to you.

You can also designate which emails and phone numbers are included in the primary contact list so that anyone with a vested interest can be alerted if something is going on at home. Not everyone needs the app installed on their respective devices to remain privy.

All the accessories that come with the starter kit are responsive and act accordingly, though this is where you'll start to see the disparity in features between the Ooma and its pricier competitors. For instance, the Ooma's motion sensor is very sensitive, but so much so that it picks up any pets that walk into its line of sight, such as my own cats. You can't adjust the motion sensor's sensitivity, so it's all or nothing.

There's a quick-dial button to call 911 from the Ooma Home Security app, which will connect you to emergency services. And because it's through the Ooma number, your address will be readily available for dispatch to mark your home's location.

MORE: Know Where Your Kids Are With These GPS Trackers

Also, there's no cellular or battery backup, so if your internet or power goes out, the system won't be able to alert you.

Ooma's smart-home functionality is limited to a few products, and most center around knowing who's calling your home. The most useful for security is integration with the Nest Protect smoke detector. If the device senses smoke or some other condition, the Ooma will automatically call you and give you the option to call emergency services. There's also the ability to forward calls from the Telo hub to your smartphone when the Nest Learning Thermostat detects you're out of the house, which is a convenient feature.

MORE: Smarter Home Guide: What You Need to Know (and Buy)

If you like the home telephone service, there's even voice-activated dialing via the Amazon Echo speaker. There are some IFTTT recipes available, too, including the ability to have smart bulbs flash for a phone call. But there's no option to trigger anything with a home-security notification — such as if the motion detector senses movement. You can view a full listing of smart-home products that are compatible with the Ooma here.

Beyond that, though, Ooma does not work with Amazon Alexa and Google Assistant to, say arm and disarm the system.

If you're looking for something really simple and just want to keep an eye on a few things, Ooma's fairly inexpensive security system is a great place to start. We like that the company added support for professional monitoring, too.

Among DIY home security systems, we prefer the pricier Abode or SimpliSafe Essentials security kits which also offer professional monitoring services, on an as-needed basis, have a more expansive accessory lineup, and are as easy to set up as the Ooma. But Ooma's system does let you know if there is movement in your house and if doors are opened or closed, which could be enough for you.