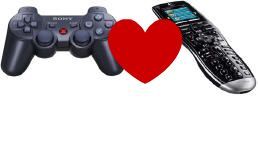 How many remote controls are on your coffee table?

Console gamers and home theater buffs without universal remotes must truly struggle to keep the living room looking decent. At my house, if we didn’t have a universal remote, we’d have this many remotes cluttering up the coffee table and couch: Receiver, DVR, Amplifier, Wii, PlayStation 3, Xbox 360, SqueezeBox (that’s seven).

Bringing in a universal remote—in our case, the Harmony One—helped a great deal. Now, only it, the Wii-Mote, and PS3 controller stay on the coffee table. Even that many is way too many for me. It drives me nuts that the Harmony One is compatible with the Xbox 360 (so I can leave that game controller hidden until it is time to play), but not the PS3. Since we use our PS3 as a DVD and Blu-Ray player, this is especially annoying.

But today, Logitech announced a hardware add-on for the PS3 that brings the Bluetooth-using console into compatibility with all of Logitech’s infrared-using line of Harmony remote controls. Should I be jumping for joy, or cursing Logitech for screwing me out of another $60? The Harmony One wasn’t cheap to begin with.

The Logitech Harmony Adapter for PlayStation 3 is available for purchase today. Logitech must’ve worked out an agreement with Sony only, because the device does not work to control the Wii (darn) or any other Bluetooth controlled device. The adapter requires an AC adapter, and, according to the blog post by Troy Petersen, Logitech’s Global Product Marketing Manager for gaming, “You will have access to special commands we’ve created through your Harmony online account, including a power-off macro that allows you to turn off the PS3, along with your entire entertainment system, with a single button.”

Yes, you’d think OFF would be an option a remote control would feature. However, Petersen mentions this because of the workaround many PS3/Harmony owners have been using until now to control the PS3 via universal remote. Virtually any infrared dongle on the market (and there are many) can control playback of discs on the PS3 via a universal remote. The only catch is that these dongles can’t help your universal remote insert or eject discs, or turn the PS3 off or on. Of course, these dongles cost about $15 versus Logitech’s $60. That’s why you call it a “workaround” and not a “solution.”

How much would you pay Logitech to help you win the war against gadget-creep on your coffee table?