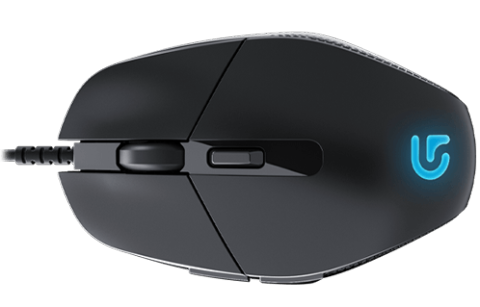 Logitech's Daedalus Prime is an excellent gaming mouse for hardcore MOBA fans, provided that you're willing to live with some drawbacks in other genres.

In Greek mythology, Daedalus was a great architect who constructed the impassable Labyrinth to entrap the deadly Minotaur. He also created a set of wings for his son Icarus, and we all know how well that worked out. Naming a mouse after Daedalus might sound like tempting fate, and indeed, the Logitech G302 Daedalus Prime ($50) shares both the brilliance and the folly of its namesake.

Designed specifically for gamers who play multiplayer online battle arena (MOBA) games, such as League of Legends and Dota 2, at tournament level (or who aspire to do so), the Daedalus Prime does one thing extremely well and others just passably. The Daedalus Prime isn't ideal for everyone, but if your computer is essentially just a box for League of Legends, then it's an excellent choice, provided that you can live with drawbacks when it comes to other genres.

By gaming-mouse standards, the Daedalus Prime is tiny and low to the ground, measuring only 4.5 x 2.6 x 1.5 inches. I didn't find it very comfortable, especially compared to the accommodating shapes of Logitech's own Proteus Core and Hyperion Fury mice, but the Daedalus Prime is not designed with everyday gaming in mind.

Logitech designed the Daedalus Prime specifically with MOBA gamers in mind. It didn't really work for me, yet this is apparently what the pros want: plain, angular and minimalistic. A slight thumb groove give the mouse some grip; two lighted plastic panels make it pretty but don't add much else.

The Daedalus Prime sports a conservative six buttons: left and right buttons, a clickable scroll wheel, a dots-per-inch (DPI) sensitivity button right underneath that, and two slim thumb buttons. Logitech, whose scroll wheels have had a mixed reputation, deserves some kudos for the one on the Daedalus Prime. It's smooth but has a pleasant resistance to it, and should be ideally suited to gaming rather than endlessly scrolling through Web pages.

Since MOBAs generally rely on a precise combination of keyboard and mouse commands, keeping the Daedalus Prime simple was a smart idea. If all you need are the left and right mouse buttons, you'll like these; they are some of the more responsive ones I've worked with. The thumb buttons are nothing to write home about, but MOBA players are not especially likely to need them.

The Logitech Gaming Software has always been a highlight of my experience with Logitech peripherals, and yet with the Daedalus Prime, I ran into a number of unexpected errors. Things got off on the wrong foot when I could not install the appropriate software on a 64-bit Windows 8 system and had to jury-rig the Windows 7 installation instead.

One of my favorite things about the Logitech Gaming Software is that it automatically scans your computer for installed games, then assigns profiles to go along with them. You can customize DPI settings (which range from 240 to 4,000, quite respectable for an optical mouse) and button configurations for each game you own, without the cumbersome process of manually switching profiles. However, for some reason, the profiles for four of the five games we evaluated (including League of Legends) on our standard test computer did not work.

I worked with Logitech to find a solution to the software issue. We were unable to determine why the software, which worked perfectly with every mouse I've reviewed up to this point, would not function with the Daedalus Prime. On Logitech's end, as well as on a secondary machine in the Tom's Guide office, the profiles worked normally.

While it's possible that the Tom's Guide gaming computer mishap was a one-in-a-million fluke, it's still disappointing that the software malfunctions essentially left me with a product that did not live up to its full potential until I tried a second machine. If you purchase the Daedalus Prime, the software will probably work just fine, but if it doesn't, be warned that there's no clear solution just yet.

Granted, MOBAs rely less on ancillary buttons and fancy profiles than do other genres, and tournament players who specialize in one game won't miss them. The mouse can store one profile in its internal memory, and this worked fine for me on every PC.

Otherwise, the Daedalus Prime lets you play with the brightness and pulsing rate of the lighting, switch among four DPI settings in any given profile, adjust the polling rate (how rapidly the mouse communicates with the computer) and launch an analytics mode that determines how often you press each button and for how long. They're helpful features but don't make or break the mouse.

Aside from the oddities with the profile software, the mouse worked fine for the standard battery of Tom's Guide test games: Titanfall, StarCraft II: Heart of the Swarm, Watch Dogs and Star Wars: The Old Republic. Since the Daedalus Prime is a peripheral primarily for MOBAs, I also tested League of Legends, and will focus most of the discussion there.

The first thing I noticed was that the Daedalus Prime has a very smart design for League of Legends. I didn't touch the thumb buttons or the DPI adjustment; I just needed springy left and right buttons, and a small, mobile mouse. There was nothing at all to using the mouse other than moving and clicking it, which is ideal for a game where speed and keyboard commands are the keys to victory.

As I am something of a neophyte when it comes to MOBAs, I handed the mouse off to my co-worker Sam Rutherford, a regular League of Legends whiz. While he found the pointy edges near the palm rest a little distracting, and the DPI-adjustment button unnecessary, he loved the left and right buttons. They responded to a light touch, he told me, but not so light that a player could click them inadvertently. He was also impressed that Logitech has recruited pro MOBA players, such as WildTurtle from Team Solo Mid, to promote the gadget.

When it comes to MOBAs, the Daedalus Prime does exactly what it promised. Just don't expect anything special for other genres.

Just as you wouldn't buy the Razer Naga unless you planned to sink most of your leisure time into massively multiplayer online (MMO) games, there's not much reason to buy the Daedalus Prime if you consume all genres with roughly equal dedication.

If, on the other hand, you want to be the next e-sports star, the Daedalus Prime could be a very useful and affordable tool in your arsenal on the way there. It won't improve your skills (only time and dedication can do that), but it can help keep you focused on the essentials, without any extra bells and whistles to slow you down.