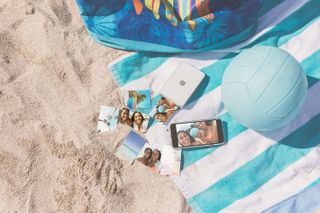 You're sharing a bunch of photos on Facebook, Instagram and Twitter. Lifeprint, a new pocket-sized photo printer, aims to make it easy to print those photos without giving up the social experience of sharing.

Available both at Apple's retail stores and through the Lifeprint website, the $129 Lifeprint connects to your phone over Bluetooth. For now, the printer works exclusively with iOS devices, though Android compatibility is planned for January 2017.

At 4.6 x 2.9 x 0.9 inches, the 9-ounce printer cranks out wallet-size photos of all those snapshots you're carrying on your phone and sharing on social media. In fact, the companion app integrates with your Instagram, Facebook, Twitter and Vine accounts. (At least, for now in Vine's case — with Twitter shuttering the video-sharing site, Lifeprint cofounder Robert Macauley expects to replace Vine with support for another social network.) You can also print content saved to your phone from Snapchat using Lifeprint.

And that highlights Lifeprint's most compelling feature: It produces prints of videos as well as photos — and not just static frames from a video, either. Hold up a print of a video in front of your iPhone's camera as the Lifeprint app runs on your phone, and you can watch the video play out, augmented reality-style.

Macauley demonstrated the feature by taking a quick 4-second Snapchat of me, with one of the app's filters superimposed over my face. He printed the video as a 3 x 2-inch wallet sized snap in about 30 seconds and held up the picture to his iPhone: We watched as the print sprang to life. The same feature also works with Instagram video filters.

While the Lifeprint app integrates with social networks you already belong to, it also has a social aspect of its own. You can amass followers and follow other people on Lifeprint, and you're able to like and comment on their photos a la Instagram.

You can also share your photos with your Lifeprint followers, even going so far as to send photos to their Lifeprint photos for them to print out. Fortunately, you are able to decline prints that other people share with you — taking its cues from yet another a social network, you swipe left to decline a shared photo and swipe right to print it, as you would in Tinder.

And given the cost of the Zink paper Lifeprint uses for its prints, you may want to be refrain from printing anything anyone shares with you. A 30-print refill pack costs $19, while a 110-print pack sells for $49.

Print quality is about what you might expect from a pocket-sized photo printer. That printout of the Snapchat Macauley captured of me looked a little muddy, with the color of my blue shirt looking a little off and my facial features not as sharp. Macauley says the company is working on a software update that includes algorithms to improve photo quality, and that should be available in the coming weeks. Even so, the quality of a print coming off the Lifeprint won't match that of a dedicated desktop photo printer.

Then again, that's not exactly the point of this product, which emphasizes portability and shareability. Macauley is betting that Lifeprint will be a hit with high school- and college-aged users, who've largely lived in an era when photos were digital not physical, and a lot of Lifeprint's features — the ability to share prints with followers and especially the video-as-a-photo capability — seem built with those features in mind. And if Lifeprint easily lets them print and share pictures — including ones with motion — that could be enough convince the printer's target audience to give photo printing a try.