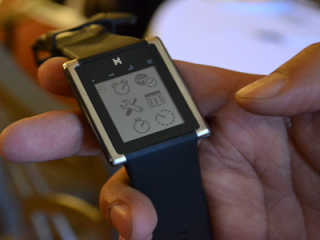 The HOT Watch is among the few smartwatches on the market capable of making phone calls rather than just bringing notifications to your wrist. Our sister site LAPTOP went hands on with the HOT Watch back in August, but the creators have made significant changes to both the design and software aspects since then.

The $179 watch now features shortcut tabs for switch between notifications, clock settings, apps and other sections of the interface. These are symbolized by small bars at the top of the screen, although we found it a bit difficult to switch between these shortcuts. The symbols are so small that you must be very precise when choosing them. Another new addition is the introduction of icons rather than a list format for menus. PHTL, the HOT Watch creators, has also slightly tweaked the design of the watch with a different logo.

The other features we noticed  during our hands on session are identical to what we saw over the summer. You still need to trace the letter D to get to the dialing screen and the letter A for apps. As is the case with the shortcuts on the home screen, you must be very deliberate to get this to work. In some cases, we had to draw our letter several times before the feature actually worked.

PHTL is touting the watch’s audio capabilities as one of its standout characteristics. Its speaker and microphone are located on the bottom of the band, and you’re meant to hold you hand up to your ear while taking a call just like you would with your smartphone. In our demo, we cupped our hand and held it to our ear like PHTL advised, which is supposed to prevent others from hearing private conversations. During the phone call I heard the person on the other line fairly clearly, but I was also able to hear my coworker’s conversation as he cupped his hand to his ear during a call.

PHTL also says that the HOT Watch will be available in various styles including Classic, Curve, Basic, and Edge. The Basic design is the cheapest at $199, while the most expensive edition is the $249 Curve.

Overall, we didn’t feel the HOT Watch’s  interface was all that intuitive. With such a small screen, it’s difficult to make such miniscule gestures. We’ll tell you more in our hands-on review soon.