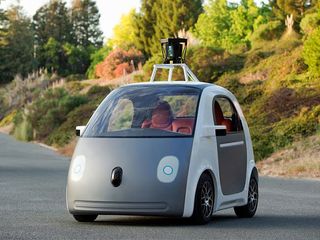 Would you ride in a Google-branded driverless car? The Internet giant announced on its blog that it's building newer, cuter prototypes of its fully autonomous, self-driving autos to give everyone access to rides without the fuss of parking.

In a video posted along with its blog post, Google showed how people, from seniors to moms, could benefit from a self-driving car. In some cases, these new cars could even drive better than some humans, as one couple in the video noted. The car they test "drove" slowed down as it approached a curve and sped up in the curve. The cars themselves resemble a marriage of a Mini Cooper and an Volkswagon bug, only lacking a steering wheel or pedals.

Safety is the top concern with the prototypes, and Google has designed them with software and sensors to detect objects and obstacles up to a distance of more than two football fields in all directions. The cars can go no faster than 25 mph, to reduce potential damage should an accident occur.

Those close to Google and the project told Re/Code that the front of the car is built with foam and its windshield is flexible so as to minimize injuries to pedestrians and passengers upon impact.

Simplicity is also key. Each car's interior features just two seats with seatbelts, space for your belongings, buttons to start and stop, and a display that shows your route.  These cars are likely to take pre-defined routes, such as from popular transit hubs to shopping malls or tourist attractions -- places that are more likely to see traffic congestion.

You probably won't see these cars on the streets for at least 2 years, since this project is still in an early testing phase. Google intends to start testing about 100 prototypes this summer. If that goes well, a small pilot program will run in California in subsequent years. These are the first working prototypes we've seen since Google announced the self-driving car project in 2010.

Google will need to clear more hurdles with lawmakers regarding the regulations around the use of these vehicles. For now, California, Florida, Nevada and the District of Columbia are the only places where the use of autonomous vehicles have been approved. Plus, given that most Americans are afraid of riding in self-driving cars, Google may have a tough time convincing consumers to get on board.