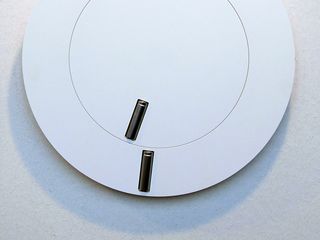 Yes, clocks with hands are a dime a dozen. But there's nothing ordinary about The Front & Back, a clock by design group The Wrong Objects that uses its batteries as hands. The two AA batteries powering the clock fit snugly into slots in front. Hence the name Front & Back: the batteries—usually hidden away at the back of a clock—are front and center in this creation.

The battery slots rotate to point the batteries in the right direction and tell the time. A little reminder that the hour hand is always shorter than its minute counterpart is needed though, at least for people who've gotten used to digital clocks.

While The Front & Back clock has made waves at the 2010 DMY International Design Festival in Berlin. Unfortunately, as a concept device, the clock's eventual (if planned) appearance on the market remains a matter of speculation.