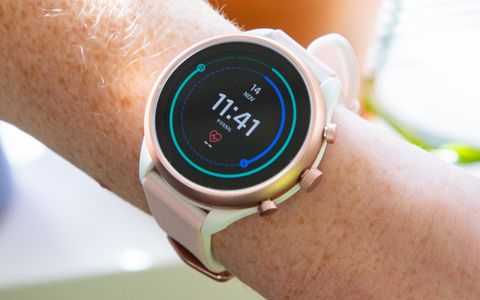 If you want to give Wear OS a try, Fossil Sport is the best Google's platform has to offer. But for a more powerful fitness-tracking smartwatch, the $279 Apple Watch Series 3 or $199 Fitbit Versa offer more for the money.

Smartwatches running on Google's Wear OS are playing catch-up with the help of a refreshed user interface, more advanced sensors and now a new processor, Qualcomm's Snapdragon Wear 3100. The $255 Fossil Sport is the second smartwatch on the market with the latest chip (the first is the ultra-expensive, $995 Montblanc Summit 2). It's the best Wear OS smartwatch you can buy. But that doesn't mean much.

Fossil's sport-focused smartwatch is an improvement over past Wear OS watches running on the older Snapdragon Wear 2100 chip. It's proof that hardware and software advances will push Wear OS forward. But when someone asks me which smartwatch is the best fitness tracker, Fossil Sport won't be my recommendation.

Fossil has been churning out stylish Wear OS watches for years, but it was focused more on fashion than on function. Past Fossil watches have included built-in GPS and heart-rate sensors for more accurate workout-tracking, but with design elements like crystals and stainless steel bracelets, they weren't exactly designed with workouts in mind. With Fossil Sport, Fossil has created a smartwatch that's incredibly comfortable to wear while working out, but also looks good enough to wear out on the town.

The first thing I noticed about the Fossil Sport is how lightweight it is, especially compared with other Fossil watches I've tested in the past. The 41mm model weighs in at 0.88 ounces, a huge improvement over the 1.23-ounce Fossil Q Venture HR. The Sport also comes in a larger 43mm size, which makes it more appealing to a wider variety of people. I found the 41mm to be the perfect size for my small wrist.

The rose-gold aluminum model with white nylon trim that I tested easily transitioned among all of the activities on my plate during the week: work, spin class, early morning runs and a bachelorette party on Bourbon Street in New Orleans where the bride requested we wear black cocktail attire. Some smartwatches look too much like little computers to work in a variety of situations (I wouldn't wear an Apple Watch to a fancy event, for instance, but I would wear a Fossil).

The Fossil Sport is one of the first smartwatches to run on the Qualcomm's latest Snapdragon Wear 3100 chip. The new CPU uses a co-processor to offload lightweight tasks, such as telling the time, to conserve power and battery life for workouts. I noticed a slight reduction in lag, which often occurred on older Wear OS watches when opening an app or saving a workout.

But 3100 didn't improve performance as much as I had hoped. Google Assistant doesn't start listening as quickly as I would like it to when I press the crown to call it up, although the answers to my questions were displayed almost instantly on-screen. (The Sport has a microphone for querying Google Assistant, but does not have speakers.) On the Apple Watch, Siri starts listening as soon as I raise my wrist, and the difference in response times is noticeable.

I opened the Play Store on one occasion to install an app, and it took 30 seconds to load, complete with a green spinning wheel. Opening more intensive apps, such as Google Maps and Uber, was an exercise in futility — it took minutes for each app to load my current location on a map, despite being connected to both my phone and my home Wi-Fi network. I would chalk that up to the GPS antenna's struggles indoors, but the watch was relying on my phone's GPS, which it locked onto right away when I began a run in Google Fit.

I thought the new processor would transform Wear OS watches, but maybe the issues are deeper than chip architecture. The 3100 chip’s co-processor does enable a few cool new features, such as a new Ambient Mode that keeps the time always on the display. It's not even limited to grayscale — depending on which watch face you choose, colorful elements make their way to the ambient face, so it has more personality when you're not looking at it. Other smartwatches, including the Apple Watch, go dark when not in use. The always-on time makes Fossil Sport feel like a real watch.

And battery life is much improved with the new processor — the Sport can make it through 24 hours on a charge, up from about 18 hours, including workouts. A Battery Saver mode enabled by the 3100 can help you squeeze out a whole week on a charge, though you have to sacrifice smartwatch features to tell time. There are no built-in sleep-tracking features, so you'll still find yourself charging up nightly. The Sport supports quick-charging with a magnetic charger, which is convenient. In 35 minutes, the model I tested charged up from 13 percent to 65 percent.

The longest-lasting Android smartwatch we've tested is Samsung's Galaxy Watch, which runs on Tizen OS. We were able to get four days of battery life on a charge.

Wear OS: A work in progress

Fossil isn't a technology company; it's a watchmaker that makes stylish timepieces for all demographics. Its touch-screen smartwatch lineup runs the gamut, from the fashion-forward Kate Spade women's smartwatch to the rugged Diesel smartwatch designed for outdoorsy dudes. Fossil Sport is somewhere in between.

Google encouraged its hardware partners, including Fossil, to add more features to smartwatches based on user feedback. Fossil included GPS, NFC and a heart-rate sensor in the Sport. Though Fossil designed a few fashionable watch faces to choose from, the software is pure Google. That's not a bad thing, especially after the Wear OS overhaul that drastically improved the interface.

Stand-alone GPS, an NFC chip, a heart-rate sensor — those are all great features, but ones we (or at least I) have come to expect from a watch that costs more than $250. It's tough to be impressed by an OS that's playing catch-up to the competition. Apple Watch Series 4 has an electrical heart-rate sensor for on-the-go electrocardiograms you can share  with your doctor for diagnosing atrial fibrillation. Sure, that watch is expensive (starting at $399 for the smaller version), but even the $279 base-model Series 3 offers advanced health and fitness features, such as high and low heart-rate alerts and a forthcoming notification for abnormal heart rhythms that's been cleared by the FDA. The Series 3 is also speedier.

MORE: The Doctor on Your Wrist: How Smartwatches Are Saving Lives

Maybe the comparison isn't entirely fair, but now that we've seen what smartwatches are capable of, Wear OS watches seem basic for what they cost.

Fitness: Limited for a sport watch

For a $255 fitness-focused watch, Fossil Sport should be more sophisticated when it comes to tracking fitness.

Sport comes with Google's built-in fitness app, Google Fit, and the ability to install third-party fitness apps for Wear OS, such as Runtastic and Strava. (More on those in a minute.) The new version of Wear OS uses Heart Points and Move Minutes to indicate something about your daily activity goals, and while I get the overall idea, I don't find either of those metrics very useful. When you swipe left on the watch face, you'll see two octogonal rings: green for Heart Points, and blue for Move Minutes. You can scroll down to see more relevant information, like steps walked, mileage covered, resting heart rate and peak heart rate. Heart-rate zones and activity-sharing would be useful.

From that screen, you can launch Google Fit. The app offers a slew of workouts to choose from, including badminton, CrossFit and flossing (as in the Fortnite dance, not the dental hygiene practice). However, the app isn't actually tracking reps for most of those workouts, or however else you would measure flossing. It simply uses your heart rate to calculate how many calories you've burned.

Fossil Sport's GPS and heart-rate measurements were accurate, in my testing. I wore a Polar H10 chest strap to compare heart rates during a 3-mile run, and Fossil Sport's average heart rate was 1 BPM off from the Polar reading (166 compared with 167 BPM). The Sport calculated a higher max BPM of 185, compared with the Polar's 180 BPM max, so it wasn’t 100 percent accurate, but still fairly close.

MORE: Who Has the Most Accurate Heart Rate Monitor?

Snapdragon Wear 3100 will gain more advanced fitness features in a sport-focused update coming next year, Qualcomm has said, which means Fossil Sport is future-proofed. I hope Google Fit becomes more advanced with future updates, too, which would make this watch a more appealing rival to Apple Watch.

Samsung's Galaxy Watch is a more capable fitness tracker than Fossil Sport, with more metrics tracked while running and the ability to automatically log exercise without launching the workout app.

If you're serious about fitness, Fossil Sport is not the smartwatch for you. Android users who want to track workouts would do better with a cross-platform fitness-tracking watch, such as the $250 Garmin Forerunner 235 (for a circular option) or the $199 Fitbit Versa (if you don't care about being square). For iPhone owners, the best fitness tracker is the Apple Watch — either the $279 Series 3 with GPS or the $399 Series 4.

Fossil Sport is the best Wear OS has to offer, thanks to its improved processor, lengthier battery life and stylish, lightweight design. But Wear OS is still lacking when it comes to fitness features, particularly when compared to Apple's watchOS or Fitbit’s OS, which offer much deeper analysis of your workouts. Samsung's Tizen OS-based Galaxy Watch is the best smartwatch for Galaxy phone owners, though its fitness features aren't as advanced as Apple or Fitbit's.

If you want an Android watch that can handle lightweight tasks, such as rejecting phone calls or querying Google Assistant, in addition to basic fitness-tracking in a stylish package, Fossil Sport is a fine option. Just know that you can find a better sporty smartwatch for your money.