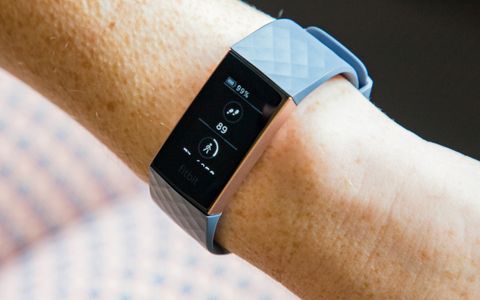 A swim-proof design, improved touchscreen and potential for deeper sleep insights make the Fitbit Charge 3 the best all-around fitness tracker for the money.

When it comes to the hardware, the $150 Fitbit Charge 3 is a solid upgrade from its predecessor. The design isn’t radically different, but a larger display with an actual touchscreen that responds instantly to swipes and taps is a huge improvement. The new band is swim-proof and offers a new swim workout mode, which makes it more useful for people who enjoy a variety of exercises.

But that’s not the most important feature. Fitbit’s efforts in sleep make the Charge 3, which has an SpO2 sensor that could potentially be used to diagnose sleep apnea, more exciting than other affordable fitness trackers on the market.

Like Apple, Fitbit is thinking beyond basic activity-tracking and notifications to give you deeper insights into your health. The Charge 3 is a step in that direction, although the health features with biggest potential aren’t quite ready for primetime. Still, the Fitbit Charge 3 is the best fitness tracker you can buy.

The Fitbit Charge 3 is available to buy now for $149.95. You can order the fitness tracker directly through Fitbit's website or from a variety of third-party retailers, including Amazon and Best Buy. Keep an eye out for Black Friday deals on the best fitness trackers, including the Charge 3, which will likely see a steep discount for the holiday season.

Fitbit isn’t reinventing the wheel with the Charge 3, which looks identical to the Charge 2 at first glance.

The biggest change on closer inspection is the display, which is 30 percent larger than its predecessor’s. The company’s goal is to put more information on your wrist at a glance, which is a good thing. But the taller screen makes some of Fitbit’s accessory bands, like the Horween leather strap I tested, sit awkwardly on my arm. The sporty bands are thicker than the leather options but also fit more comfortably around my wrist.

If you’re upgrading from the Charge 2, you’ll notice that the side button is no longer a mechanical piece that depresses when you touch it. Fitbit engineered an inductive button that responds with haptic feedback when you use it to toggle through the menu or pause a workout. The new button creates a sleeker look, and also makes the Charge 3’s design swimproof.

I like the new look, and I also appreciate the feel of the haptic feedback, which is a slight, subtle vibration that radiates throughout the device.

Like the Charge 2, you can easily swap in bands made of different materials to switch up your look. The band pieces attach easily — it takes just seconds to remove one piece and slide in another.

Fitbit’s larger screen definitely comes in handy. Now you can read entire messages and notifications without having to follow side-scrolling text, and view multiple apps on the screen at the same time. (Just two, but that’s an improvement.)

But more importantly, the Charge 3’s display is now fully touchscreen. The Charge 2 was more of a tap-screen — you had to jab at the display with your finger to view stats such as mileage covered and calories burned. Now you can simply swipe up on the home screen to view all of those metrics and quickly scroll through them.

The new tracker doesn’t have a full-color display; instead, its text and animations come in 16 shades of grey. Color would be a nice touch, especially when running outside. The reflective screen can be tough to see in the morning light, even without a direct glare. Red or yellow text would be easier to glance at.

Another minor complaint: Fitbit should minimize the bezels on its fitness band displays. Everyone can tell you’re wearing a Fitbit; there’s really no need to take up valuable real estate with a logo on the chin.

Workouts: Improved, but not perfect

The Charge 3 can now withstand water submersion, so swimmers can track their laps with the new band by activating the new Swim workout. On your wrist, you’ll be able to see time elapsed and calories burned, and then view full workout stats when you sync the Charge 3 to the Fitbit app.

This is a big deal for swimmers who don’t want to splurge on a waterproof swim-tracker such as the $199 Versa or the $279 Apple Watch Series 3.

Fitbit now has just one fitness tracker with on-board GPS, the Ionic, which one of the company’s worst-designed devices. I was hoping the Charge 3 would improve upon the Charge 2 by adding GPS, but unfortunately, the new band has to connect to your phone’s GPS to accurately track workouts instead. The good news: The Charge 3 locks onto your phone’s GPS within a second (literally). The band also tracked one 3.18-mile run fairly accurately even without GPS activated — it logged the run as 3.24 miles.

I tested the Charge 3 against a Polar H10 chest strap, the gold standard for consumer-grade heart rate-monitoring, and found that the band accurately measured my BPM while resting, but wasn’t spot on while running. After a 3+-mile run, the Polar chest strap calculated that my average heart rate was 163; the Charge 3 estimated the average was 158 BPM. The Charge calculated my max heart rate at 173, while the Polar reported 180 BPM. The Charge also lagged behind the Polar by more than a minute in the beginning of my run when my heart rate jumped up to 156.

This isn’t a huge deal in terms of activity-tracking, because heart rate is more useful to gauge trends and overall fitness level. But as Fitbit prepares to move into health diagnostics (more on that later), accuracy will become essential.

The redesigned touchscreen display makes it easier to swipe through metrics while running, but I’d prefer to see more stats on-screen at the same time rather than having to swipe with sweaty fingers to see current pace, average pace, heart rate and time.

The Charge 3 didn't automatically track runs at launch, but Fitbit fixed that with an update in December.

Like Fitbit’s Versa and Ionic smartwatches, the Charge 3 has an SpO2 sensor for measuring blood oxygenation levels. With that information, Fitbit can tell if you experience breathing disruptions while you sleep. Or it will soon.

In November, Fitbit is opening up a Sleep Score Beta program to qualifying Fitbit users that will use the Charge 3’s SpO2 and heart rate sensors to assess your sleep quality and rate it out of 100. (If you own a Fitbit without an SpO2 sensor, you can still participate in the beta, but you won’t get alerts about breathing disruptions.)

Fitbit could also use the SpO2 sensor to diagnose sleep apnea with clearance from the U.S. Food and Drug Administration, though it’s unclear as to how far along in that process Fitbit is. Apple just received FDA clearance for two Apple Watch features, one an electrocardiogram app that uses the Series 4’s electrical heart rate sensor to diagnose atrial fibrillation, or irregular heart rhythm. The other is a watchOS feature, not exclusive to the Series 4, that alerts users if they experience five instances of irregular heart rhythm.

Fitbit is also working on atrial fibrillation, but has already differentiated itself with in-depth sleep analysis, which the Apple Watch doesn’t offer. With an SpO2 sensor, the Charge 3 (alongside the Versa and Ionic) could give Sleep Score Beta participants life-changing health information. The potential is huge.

Battery Life: As good as promised

Where Fitbit routinely pulls ahead of the competition is battery life, and the Charge 3 delivers up to a week of fitness-tracking and notifications on a charge. After three days and three workouts, the band was still chugging along at 68 percent. That’s impressive, because I was also using the band to check notifications, the weather and playing with settings with the brightness on auto (as opposed to dim or normal, which would conserve battery).

Fitbit makes trade-offs to keep battery life lengthy, but for many people, week-long battery life would be a great reason to buy this band.

Fitbit’s most high-profile new devices have been smartwatches, but the company hasn’t forgotten that its best-selling product is the Charge 2. The Charge 3 is an obvious upgrade if you’re a swimmer who wants in-depth sleep analysis in a device that can last a week on a charge.

The Charge 3 doesn’t blaze any trails — at least not yet. I’m curious to see what Fitbit does with the Sleep Score Beta data, which could inform medical-grade software features down the line.

Fitbit still hasn’t made the perfect fitness tracker. But the Charge 3 is one step closer.