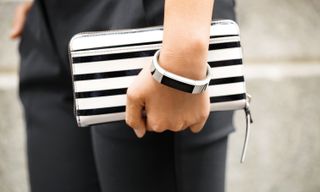 Although Fitbit has worked with designers such as Tory Burch to create fashionable bands for the Fitbit Flex, the $130 Alta is the company's first activity tracker that's fashion-conscious right out of the box.

Slated to ship in early March, the Alta has a stainless steel body with a satin finish. It will initially be available with black, teal, plum and blue elastomer bands. Fitbit will offer other bands, including stainless steel ($100), and blush pink and graphite leather bands (each $60). For those looking for even more options, Fitbit and Tory Burch will introduce new bands for the Alta, similar to how the companies collaborated on necklaces and bracelets for the Fitbit Flex.

MORE: Best Fitness Trackers for Every Style and Budget

The Alta has an OLED screen that will display your daily progress, as well as call, text, and calendar notifications. In addition, the Alta will give “friendly reminders” to wearers to get up and move to reach hourly step goals. Similar to Fitbit's other wearables, the Alta will have SmartTrack technology, which automatically recognizes a variety of workouts, including walking, running, biking, elliptical use, cardio workouts, and sports (including basketball, soccer and tennis).

Fitbit claims that the Alta should last for five days on a single charge, and that it should require between one to two hours of charging time to fill its battery.

The Alta looks to compete with other stylish trackers, such as the $99 Misfit Ray, whose slim metal tube design can be worn on the wrist or as a pendant. Fitbit and Misfit are also hoping that their more stylish trackers will lead to users wearing them longer than a month or so; only time will tell if this strategy works.