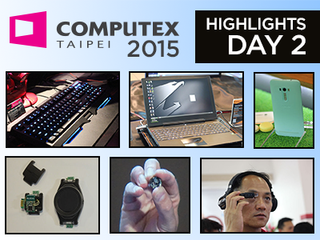 Day two of Computex 2015 is in the books, and the awesome innovations keep coming. We've played with gaming laptops that track your eye movement, tested an ultra-tweakable mechanical keyboard and learned about a modular smartwatch that lets you swap out pieces at will. Here are our favorite gadgets from our second day on the show floor.

Selfie-centric phones are popping up everywhere, but Asus' ZenFone Selfie stands out by including a 360-degree stand that lets you frame the perfect self-portrait. The Selfie packs 13-megapixel cameras on both its front and rear, and offers plenty of neat software features for customizing your face shots before their big Instagram debut.

Prefer your smart glasses with a side of headphones? That's exactly what SiME delivers with its pair of Smart Headphones, a quirky contraption that combines a standard audio headset with a Google Glass-like heads-up display. As with SiME's Smart Glass, this wild wearable brings a full version of Android 4.4 to your eyeballs, with an optional custom interface that makes it easier to access apps.

If you haven't found the right smartwatch, why not build one? Blocks Wearables wants to give you the tools to make your dream digital timepiece, with modules that add features such as motion tracking, heart rate monitoring and a fingerprint sensor. Interestingly, these custom smartwatches will run Android Lollipop, rather than the pared-down Android Wear found on devices like the LG G Watch and Motorola Moto 360.

Nvidia's G-Sync technology has found its way to a host of gaming laptops for Computex 2015, including the already awesome Aorus X5. This speedy and attractive gaming notebook can now sync its graphics card with its display thanks to G-Sync, which means you can explore the lush forests of The Witcher 3 without worrying about any unpleasant screen tearing.

MSI's G72 Dominator also gained G-Sync capabilities, but that's not all that makes it exciting. A separate version of this 17-inch gaming laptop now packs Tobii EyeX eye-tracking technology, allowing you to control the in-game camera in select titles by simply moving your eyes around.

PCs are about to get a whole lot more powerful. Intel unveiled a handful of notable performance innovations at Computex 2015, including its new Broadwell H processors that utilize Iris Pro to deliver double the graphics performance. We also got a tease at the company's 6th-gen Skylake processors, new Thunderbolt 3 cables for super-fast transfers and got a glimpse at a computer prototype that's the size of a shirt button.

Rosewill's RGB100 mechanical keyboard aims to deliver the ultimate customization experience, with keys that can be individually programmed to light up in over 16 million different colors. You can customize the keyboard to display patterns or cool animations, or go really in-depth and make each key its own color. This keyboard is more than good looks, too -- with an option of blue or brown mechanical switches and multiple sensitivity settings, gamers should have no trouble finding the setup they need to dominate.

Mike Andronico is an Associate Editor at Tom's Guide. When he's not writing about games, PCs and iOS, you can usually catch him playing Street Fighter. Follow Mike @MikeAndronico. Follow us @TomsGuide, on Facebook and on Google+.