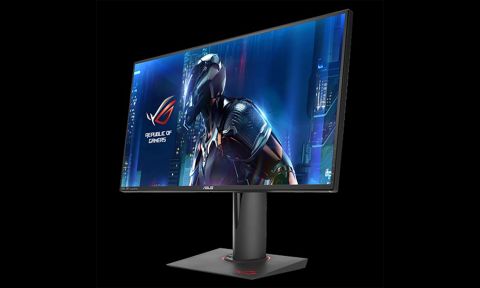 Get the Asus ROG Swift PG27A if you're willing to shell out for 4K, G-Sync and lots of useful extras. If you can settle for FreeSync, the ViewSonic XG2700 is a solid and much cheaper alternative.

If you're spending upward of $900 on a gaming monitor, you better be getting the best of the best. Fortunately, the Asus ROG Swift PG27A offers a ton for its premium price, including a gorgeous and colorful 27-inch 4K display and Nvidia G-Sync support for extra-smooth performance. Factor in its solid speakers, intuitive interface and impressive ergonomics, and you've got an excellent high-end option for folks who want 4K and G-Sync on a big screen.

Asus monitors tend to stand out more than the average gaming display, and the PG27A is no exception. This is a screen clearly designed for gamers, with the glowing red LED lights and futuristic patterns on its large, sharply angled base.

It's not all for show, though; there's a slick triangular opening in the middle of the stand that makes it easy to organize your cables. Even more impressive is the PG27A's adjustability -- you can raise or lower the display about 5 inches up or down, swivel it 60 degrees left or right, or tilt it 20 degrees backward or 5 degrees forward.

You can even pivot the screen into portrait mode, which is useful for viewing Twitch chat or getting work done and makes it much easier to reach the monitor's ports. In short, you'll have absolutely no trouble making the PG27A work in your setup.

The PG27A offers the essentials when it comes to ports, featuring HDMI and DisplayPort 1.2 connections that let you keep your PC and console (or streaming box) hooked up at the same time. You've also got three USB 3.0 ports for peripherals, as well as an audio jack for your headphones.

Like most Asus displays I've tested, the PG27A's interface is wonderfully easy to navigate. Thanks to a directional nub and a series of snappy physical buttons, doing things like changing display presets and activating special features took only  a few taps. The monitor's main menu is robust and clean, so you won't have to fuss around much to change inputs or tweak color and brightness.

I never think I need a pricey 4K G-Sync gaming monitor, and then I get my hands on one. Playing Mass Effect: Andromeda on the PG27A's 27-inch, ultra-HD display was revelatory; the game's lush forests and imposing alien structures looked incredibly sharp and colorful.

I could even make out the tiny scratches and patches of condensation on my character's helmet -- two details that I never really noticed before. That high fidelity didn't come at the expense of smoothness, as I was able to dash from cover to cover and blow up enemy aliens with no discernable input lag.

I then switched gears to Heroes of the Storm, a multiplayer-battle-arena game that demands fast response times for optimal play. Clicking around the map as nimble ninja Genji felt satisfyingly instant, with no noticeable latency to keep me from slicing foes in half. Blizzard's colorful characters looked wonderfully vibrant on Asus' display -- particularly when using the display's genre-appropriate RTS mode.

Playing Street Fighter V on the PG27A went just as smoothly. Even with the game dialed up to 4K, I had no issues pulling off tricking, timing-sensitive combos in Capcom's fast-paced fighting game. The game's colorfully outfitted characters and purple-ski backdrop really popped, too.

The PG27A features Nvidia G-Sync, which syncs up your graphics card directly to your display to provide the smoothest experience possible. I found G-Sync to be particularly useful when playing graphically rich games at high settings, as it cleaned up some very noticeable screen tearing in Mass Effect: Andromeda.

In addition to faring well during real-world use, the PG27A turned in mostly strong results in our lab tests. The one area where Asus' monitor faltered a bit was overall brightness -- the display registered 234.2 nits on our light meter, which trails the Acer XB321HK(295 nits) and our 250-nit gaming monitor average.

The PG27A features the usual handful of GamePlus special features  you get with most Asus monitors. That includes an on-screen frame-rate counter, a timer for use with strategy games and a variety of crosshair overlays that help you get a better aim in shooting games. They all work as advertised, and the included crosshairs synced up especially well with games like Mass Effect: Andromeda and Rise of the Tomb Raider.

You also get a suite of display presets designed for different genres. I was mostly content sticking to the default Scenery mode, which provided a good amount of color and high brightness for everything I played. The extra-saturated RTS/RPG mode made it easy to identify each little character in strategy game, while the high-contrast FPS mode did the same for shooters. There's also a darker Cinema mode, a low-latency Racing mode and an sRGB mode, for when you need to get some photo work done.

The PG27A's 2-watt speakers were pretty satisfying as far as built-in display audio goes. Whether I was firing assault-rifle shots at aliens in Mass Effect or cranking up the Doom soundtrack, I was consistently treated to crisp sound that was loud but not quite room-filling. You're still better off using a gaming headset or getting a dedicated pair of speakers, but the PG27A's integrated audio will do the trick for quick-play sessions.

If 4K and G-Sync are your top priorities, the Asus ROG Swift PG27A is one of the best high-end monitor options around. Games look stunning and run smoothly on its 27-inch, 3840 x 2160 display, and the painless interface and impressive adjustability make it a breeze to adapt the monitor to your needs.

The $580 ViewSonic XG2700-4K gets you ultra-HD for significantly less and has unique features like picture-in-picture, but you're getting FreeSync instead of G-Sync. Acer offers its own impressive 4K G-Sync option in the XB321HK, but it'll run you over $1,000 and is getting harder to find. Overall, if you're willing to shell out for stunning picture quality and a rich feature set, the ROG Swift PG27A delivers.