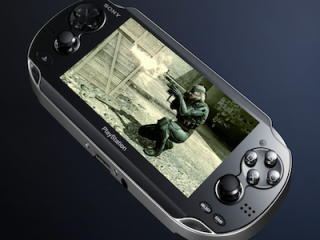 Sony first revealed the new PSP, known now as both NGP and PS Vita, in late January. The company was more than happy to reveal specs for the device, and in June Sony gave it a name. The portable was christened 'PS Vita' and given U.S., European and Japanese pricing. Today, Sony detailed the online modes and social features of the PS Vita.

Eurogamer reports that Sony has revealed official details on the PS Vita's four online modes, which have been dubbed Near, Party, LiveArea and Activity.

Near is described by Phil Rogers, Sony Europe manager of R&D, as "a location-based gifting system" that allows users to 'drop' gifts for each other and see other gamers in their area.

"You can see where people are in relation to your location, their five most recently played games and also gifts that they've registered," Rogers told Develop 2011 attendees. "This is fairly cool because it exposes users to games they might not have heard of and you can see how popular those games are and how people are rating them."

Users can gift challenges, rare items only discoverable by certain people, gifts for everyone, or gifts only capable of being picked up a certain number of times.

LiveArea is "where you go to launch your PS Vita day" Rogers revealed. LiveArea will have three modes, Index, Live and Game, and will be the landing point when starting any game. It's a place to access information from devs, comment on the activities of others and publish your own messages. Though all PSVita games will ship with a standard version of LiveArea baked in, game developers can push updates to their LiveAreas and create a unique user experience for gamers. LiveArea also packs location-tracking and can record your location via WiFi or 3G. Sony says it's 'open to innovation' when it comes to how developers want to use this feature.

Activity incorporates things like trophies and ratings and is meant as a medium for discussing progress with other players.

"The system automatically puts a few activities in there," Eurogamer quotes Rogers as saying, giving trophies as an example. "That encourages people to then comment similar to Facebook style."

Last, but certainly not least, is Party. Party allows for cross-game voice chat that allows you to pair up with three of your friends and chat over PS Vita via voice or text. You can have different Party groups for different games or genres and you can turn off voice when you need to.

"If in-game you've got your own teams for audio then you can override the Party chat and turn that off," assured Rogers.

Are you excited about the online modes for PS Vita? Let us know in the comments below!

Read more over on Eurogamer.