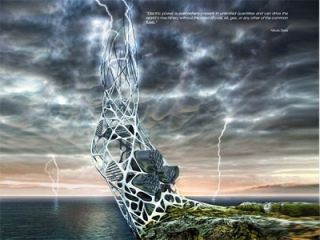 Here to solve the world's energy crisis is the creation of Vuk Djordjevic, Milos Vlastic, Milica Stankovic, and Ana Lazovic titled Hydra. Harnessing the power of hydrogen to generate sustainable electricity, Hydra is truly an incredible skyscraper design that nailed the creators first place in the prestigious 2011 Evolo Skyscraper Competition.

The structure works by harnessing the power of hydrogen through powerful lightning storms nearby. As lightning gathers around the skyscraper its energy is harvested within the graphene body of the structure which conducts and channels the lightning for storage in several mega-batteries installed at the base of the structure.

Hydra operates through the process of electrolysis passing through water molecules to burst them into hydrogen and oxygen energy that can easily be stored transported and used for various purposes. Because of the versatile nature and abundance of hydrogen, many scientists believe that it is the world's next biggest source of energy.

In addition to harvesting and producing hydrogen energy, the Hydra station is also designed to house scientists, research facilities and families. There will be plenty of recreational areas for the families to enjoy. Since the power of hydra relies on thunderstorms, the skyscraper is designed to be built for the tropics where 70% of the world's fiercest thunderstorms occur.