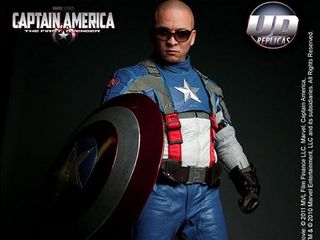 If you're a biker and a fan of Marvel's Avengers, anxiously awaiting the May release of the film, UD Replicas definitely has you covered. To add to their incredible collection of detailed movie-themed motorcycle suits, such as the awesome Stormtrooper outfits, the company just began selling a Captain America suit based on the recent Captain America: The First Avenger film.

This extremely detailed replica is 100 percent leather and comes complete with gloves, boots, pants, belt and jacket. It also includes a removable CE approved spine protector and body armor for added protection. Unfortunately dressing up like Steve Rogers isn't the same as injecting yourself with a super-soldier serum that will protect you from motorcycle crashes.

The complete outfit costs $1,290 USD and can be pre-ordered up until February 29th at the UD Replicas website. Unfortunately it doesn't include a shield or helmet, but the price still isn't bad for a high-quality suit. The suit will arrive sometime in late April, just in time for you to suit up and ride out to your local midnight Avengers screening in May.