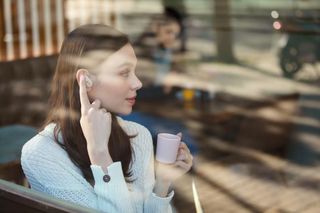 Sony’s new true wireless earbuds are due to hit the shelves in August, but tech outlets have already got their hands on the WF-1000XM3s.

At $229, these wireless earbuds are more expensive than Apple’s super-popular AirPods, the Sonys make the premium worthwhile with their features. These include noise cancelling, motion detection to adjust settings based on your current activity,  six hours of battery life and a charging case that gives you three full charges.

The WH-1000XM3s, Sony’s full headphones with many similar features, are universally acclaimed, including by Tom’s Guide. But how do the WF-1000XM3s fare? Read on and find out.

Adrienne So gave the Sony WF-1000XM3 earbuds high praise on behalf of WIRED, particularly for the (in some cases overeffective) noise cancelling. Her complaints were that the buds weren’t particularly suitable for exercise, that the controls were finnicky, and that the name is boring, but overall her review glows with kind words for the WF-1000XM3s. So concludes that for everything but the gym this is a fantastic product.

“The WF-1000XM3 sound fantastic, fit securely and comfortably, and have some fun, touch-based features that make them easy to use. And their active noise canceling is so effective that it's starting to scare my family.”

“I’ve always thought of mobile apps that control headphones as overkill, but I found Sony’s to be useful.”

“You can fiddle around with the EQ in the app—I mostly switched between bass boost and speech settings, but I didn't need to. Most things sounded great without my interference.”

“Truly, the worst part about Sony’s noise-canceling earbuds is their name. As with the names Sony gives to most of its personal electronics, you might as well be reciting a serial number.”

“There is a running setting on the adaptive sound controls, if you want to use them for working out, but they’re not technically water-resistant or sweat-proof. They’re also a little too bulky to feel comfortable exercising in them.”

“One thing that's missing: quick volume controls. They're optimized for Google Assistant, so I suppose you could use voice controls to make them quieter and louder. But Google's assistant is not the assistant I use, so I pulled out my phone to control the volume instead.”

Sony WF-1000XM3 Noise Canceling In-Ear Headphones
Amazing noise cancelling in a small package, these Sony earbuds make for great traveling or office companions. They sound great, offer a comfy fit and shut out the world around you without bulky cans. They offer six hours of battery life.View Deal

Gizmodo’s review, by Adam Clark Estes, talks about how impressive Sony’s progress is in miniaturizing its noise cancelling technology from headphones to earbuds. However, he points out that the buds and charging case are still quite large in comparision to competitors. He also had problems with connectivity, since the buds can only pair with one device at a time and seem to do so at slightly different speeds. Overall, the effective noise cancelling and great sound win Clark Estes over, but not enough to stop using his favorite Jabra Elite Active 65t earbuds (which we at Tom’s Guide are also fans of).

“The noise-canceling is good enough that, when I’m wearing them, people talk to me on the Subway, and I don’t even realize it. (This is often a good thing on the Subway.) My sometimes bustling office also becomes silent when I crank up the noise canceling to max… I’m not sure I would need stronger noise canceling than what the 1000XM3 earbuds offer, except if I were on an airplane.”

“When the distracting din of the outside world calmed down, the earbuds do a terrific job with audio fidelity, producing a balanced and detailed experience.”

“The result is a terrific set of earbuds unlike anything else on the market.”

“The first thing I noticed about the 1000XM3 truly wireless earbuds is that they’re not that small. The charging case is almost the size of a pack of cigarettes, and the earbuds look like high-tech mutant hunks of caramel corn.”

“I’m also not crazy about the touch controls on the outside of each earbud. One tap should play or pause your music or adjust the noise-canceling—you can program them to do a few different things—but I don’t think the touch surface is responsive enough.”

The review by Digital Trends’ Parker Hall is another positive one. While he isn’t inspired by the design, he is a big fan of their noise cancelling ability, and while the lack of waterproofing does concern him given the price, he is able to forgive it because these buds aren’t aimed at heavy sports use. While he identifies other excellent wireless buds like the Beats Powerbeats Pro and Sennheiser Momentums beat the Sonys in certain categories, the all-round quality of the WF-1000XM3s means Hall gives them a full recommendation.

“[The WF-1000XM3s} are flag-bearers for a new era of brilliant noise-canceling headphones that are smaller and more convenient than ever.”

“That (noise cancelling) processing works like an absolute charm, easily drowning out keyboard clicks, public transit noise, and loud in-office conversations. You won’t get the same insane reduction you’ll hear on the bigger WH-1000xM3 over-ears, but these headphones have a staggering amount of reduction for their size, and coupled with the fact that they offer excellent passive noise isolation on their own, we’re very impressed with their performance in loud spaces.”

“Treble is clear and crisp, and there is a hefty low end that never becomes a mud pit. Instead, songs feel like they have a weight and depth that we often miss on other pairs of true wireless earbuds, which tend to feel a bit exaggerated in terms of their sonic profiles.”

“Aesthetically, the buds look well made, but aren’t much to write home about when it comes to style.”

“Despite all their many bells and whistles, the WF-1000XM3 have two shortcomings: They don’t have any water resistance, so gym use is an at-your-own-risk situation, and they also don’t have a way to adjust volume without pulling up your voice assistant or touching your phone.”

Chris Welch, writing for The Verge, says that while Sony’s noise cancelling over-ear headphones are still better overall, the M3 earbuds are an improvement over the previous generation M1s. The sound quality and EQ versatility is only bettered by far more expensive earbuds as far as he’s concerned, and he found the connection quality fine unlike some other reviewers. Welch criticizes the lack of multiple simultaneous pairing functionality, and doesn’t take kindly to the lack of waterproof rating at all, but says that this is the only factor that prevents him from giving the buds a perfect rating.

“Whether I’m listening to The National, Carly Rae Jepsen, Jason Isbell, Maggie Rogers, or Lizzo, the M3s are proving plenty capable, with ample bass, good separation, and the ability to juggle genres without issue.”

“Through all of that time, I’ve barely noticed any connection dropouts — even in trouble spots and intersections where true wireless earbuds can frequently struggle.”

“[The WF-1000XM3s] fit better, look nicer, exhibit very little signal loss, and have improved battery life. And this time, the noise cancellation is a true standout feature that differentiates them from the field.”

“Just know that Sony still doesn’t let you pair to two devices at once. So if you’re listening to music or watching something on your laptop and a call comes in, you’ll have to pop the buds out instead of just seamlessly answering it. Sony, please figure this out for the eventual M4 model.”

“Bafflingly, Sony is going to market in the summer with a set of earbuds that aren’t technically cut out for exercise or coming with you on a run — or even if you just break a sweat on a hot day... The original model also lacked an official water-resistance rating. But for $230, I find this to be borderline unacceptable.”

Tech Radar’s Steve May gives a perfect score to the WF-1000XM3s, albeit with some caveats. According to his review, the design and fit are great, the sound quality was good enough for most uses, and the noise cancelling was very effective. However, having put the buds’ through an in-flight test, May found them wanting, and he criticized the lack of higher quality audio processing. On balance, May likes these earbuds, and endorses them as a convincing alternative to larger noise cancelling headphones.

“If earbuds were only judged on their design alone, the WF-1000XM3 would already win all the marbles... Plus, weighing just 8.5g each, they're comfortable in the ear and they look stunning.”

“If your commuting vice is podcasts, the mid-range is silky smooth. If you prefer to rock out, they roll with the best of them - guitars have edge, drums are tight and hard. Alternatively, dance and pop mixes sound positively frothy.”

“We found it virtually impossible to hold a conversation with Active Noise Cancelling engaged - which is a good thing when you're trying to keep outside conversations on a flight, train ride or day at the office to a minimum.”

“Airplane cabin noise proved too much for the diminutive buds. While the WF-1000XM3 were able to reduce the drone of an aircraft in flight, they certainly didn’t eliminate with the same ruthless efficiency of the WH-1000XM3.”

“There’s no support aptX HD or Sony’s high headroom LDAC Bluetooth extension. The WF-1000XM3 also use a 24-bit audio processor, not the 32-bit silicon found in the WH-1000XM3. Sorry audiophiles, you're going to have to buy the full-size cans if you want all the best features.”

“There’s some appreciable bass, but no boom. If you want a more pronounced thump, then over-ears are always going to be a better bet.”

One of the best gets better, as the Sony WH-1000XM3 packs killer sound and noise cancellation into a slender design.