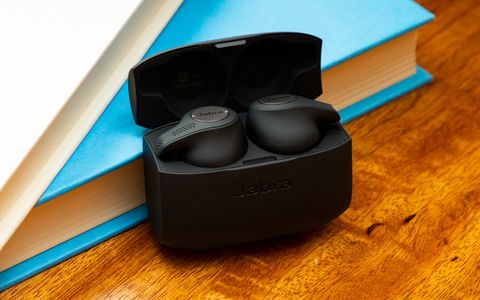 I freaking love these earbuds. I don't say that lightly.

Jabra took our favorite, completely cord-free earphones, the Elite 65t, and made them sweat-resistant and longer-lasting without significantly raising the price. If you're on the hunt for a pair of totally wireless Bluetooth buds for working out, the Elite Active 65t is one of the best you can buy. They're also one of our top picks for Best Wireless Earbuds, Best AirPod Alternatives and Best Headphones.

Jabra's Elite Active earbuds are small, sleek and unobtrusive. Unlike Apple's AirPods, which are noticeable from a mile away due to the white stem that hangs down from the ear, no one will notice your Jabras. The buds are circular, with a small arm and a protruding tip that help them fit more snugly in your ears. Apple's AirPods Pro have a slightly shorter stem than the original model, but they're still noticeable.

The Elite Active comes in black and blue with an inlay that's titanium for the former or copper for the latter, emblazoned with the Jabra logo. The left earbud also has notches to indicate where to press to skip and repeat tracks.

Unlike Apple's AirPods, which are noticeable from a mile away due to the white stem that hangs down from the ear, no one will notice your Jabras.

The buds tuck into an oval charging case, which stores the Elite Actives in between workouts (and keeps them from getting lost). The case was actually the source of my biggest issue with these otherwise amazing earbuds: It's damned near impossible to open.

At first, I thought I was a weakling. The case just wouldn't budge open unless I pried it apart with my fingernails. Then I had three of my co-workers try it — same issue. Finally, one of us (it wasn't me) figured out that you had to squeeze and open the case at the same time to lift the lid. I feel like it shouldn't be that difficult, so I docked a half star for the annoyance.

The Jabra Elite Active 65t is one of the most comfortable sets of completely cordless Bluetooth earbuds I've ever worn. Other sets can be uncomfortable, because the bud has to be engineered to fit securely without a cord for balance. But everything about the Elite Active 65t's shape just works: the pod, the small arm — which helps you insert and then anchor the bud by rotating it forward — and the in-ear tip, which comes with three sets of silicone gels in various sizes to tailor the fit.

The Jabra Elite Active 65t is one of the most comfortable sets of completely cordless Bluetooth earbuds I've ever worn.

These buds don't move. When I was jostled on my 45-minute subway commute, they stayed put. During 3-mile runs on blustery December days in Brooklyn, they stayed put. When I tucked my hair behind my ears and brushed the left bud, I thought it would tumble to the ground. But it stayed put.

Unlike the Elite 65t buds, the Active model has a built-in accelerometer, which makes it a capable fitness tracker. It doesn't log runs automatically; you have to open the Jabra Sound+ app, tap Active and start a run to track your miles. If you use Active mode, Jabra's HearThrough feature automatically turns on to allow in ambient noise.

Presumably, HearThrough is a safety feature that you would want to have while running along busy streets, but I don't like it much. I could hear my footsteps pounding on pavement and a band playing as I ran through Brooklyn's Prospect Park, which was distracting when I wanted to listen to music and focus on my run. I wish Jabra would make HearThrough optional, like it is when Active mode isn't enabled.

I didn't find myself using Active mode much, and not just because of HearThrough. Other fitness trackers can give you far more information than just time elapsed and steps per minute. But more importantly, the Actives are sweat-resistant, which makes them a perfect workout companion.

Jabra offers EQ presets in its app so you can customize the Elite Active 65t's sound to your liking. I like my sound a little heavier on the bass for running, so I chose Bass Boost, but you can also bump up the treble. Jabra lets you customize the presets to perfectly fine-tune the sound to your preferences.

The Elite Active 65t offers practically perfect sound, especially for workouts, because the in-ear tips block out most noise. The bass-forward preset I picked was perfect, whether I was bopping around to Ariana Grande's "thank u, next" or pounding the pavement to the thumping bass and piano chords in Cardi B's "Money." Phone calls and podcasts also came in loud and crystal clear.

The bass-forward preset I picked was perfect, whether I was bopping around to Ariana Grande's "thank u, next" or pounding the pavement to the thumping bass and piano chords in Cardi B's "Money."

Like my all-time favorite fitness earbuds, Jaybird's Tarah Pro, the Jabra Elite Active 65t buds last 15 hours on a charge. This is possible because of the charging case — the buds can last 5 hours on their own and then an additional 10 hours if they are charged up in between workouts.

In my experience, this added up to close to two weeks of wear without having to charge the case (which also charges the earbuds in the process). In those two weeks, I went on a handful of 30- to 35-minute runs and listened to podcasts on my 45-minute commute to and from work almost every day. I never had to worry about dead earbuds.

Then, one day, I left the buds outside of their case. For two days. (I blame my husband, really, because he put them in our junk drawer. But I digress.) The case itself wasn't totally dead, but there wasn't much life left, and I wanted to go for a run. So I stuck the earbuds back in the case, plugged in the case for 15 minutes and crossed my fingers. When I put the buds back in my ears, they were fully charged. Relief!

You can now find Jabra's Elite Active 65t for less than $130, which makes it a great value compared to Apple's $249 AirPods Pro and $249 Powerbeats Pro. The Elite Active 65t also has a sleeker, less obvious design than both those splurge-worthy sport earbuds.

If you want to cut the cord, you can spend more for better iPhone integration and longer battery life. But for the price, Jabra's Elite Active 65t is the headset to beat.