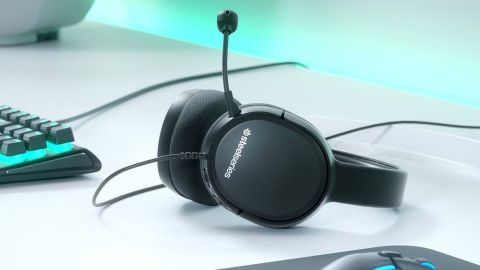 In the past, I've lamented that it's very, very difficult to make a great gaming headset that sells for less than $60. You get a few in the $80 range, and plenty at $100+, but true budget models always seem to have some critical flaw.

Ugly design, uncomfortable fits and poor music performance are the common culprits. That's why I was impressed that the SteelSeries Arctis 1 ($50) doesn't fall into any of these traps.

Impressed, but not surprised. The Arctis has generally been the best line of gaming headsets on the market since its introduction back in 2016, and I didn't really expect SteelSeries to cut corners on its first budget peripheral.

While the Arctis 1 doesn't offer as precise a fit as the more expensive Arctis headsets, it still sounds great, looks sleek and works with just about every platform out there. I'd still recommend the Arctis 3 if you can lay out another $30 up front, but the Arctis 1 is, for the moment, as good as $50 gaming headsets get.

What I'm less crazy about is the steel headband with rigid notches. There's plenty of padding, so it's comfortable to wear, but it's very tough to get a precise fit. I'll touch more on that in the next section, but it's a big step back from the "ski goggles" design in the Arctis 3, 5, 7 and Pro, which automatically adjusts to your head each time you put it on.

The left earcup is where you'll find all of the headset's special features, including a volume dial, a mic mute button and a removable mic. Removable mics in $50 headsets are hard to come by, and I was impressed that the flexible mic is both unobtrusive and easy to detach. This way, you can use the Arctis 1 as an everyday pair of headphones, or simply ditch the mic when you're immersed in a single-player adventure.

While the headset connects via a single 3.5 mm audio jack, the device also comes with an audio/mic splitter for gaming PCs. The cable is almost comically long, so you'll have to figure out a way to shorten it, depending on how close you sit to your PC, but better too long than too short. Otherwise, it can connect to just about anything, from mobile phones to game consoles.

By far, the Arctis 1's biggest drawback is that it uses rigid notches to find a fit rather than an elastic headband. This means that you'll have to do a lot of fine-tuning to get the headset to sit right, and if someone else picks it up and puts it on, all your hard work will be reset.

On top of that, the headset seems very big. Even though my head has a fairly large circumference, I had to wear the Arctis 1 in its tightest conformation. Otherwise, it felt like it was going to slip off.

Even though I couldn't get a precise fit, though, the peripheral wasn't uncomfortable to wear. The foam earcups didn't press down hard, even though I wear glasses, and the padded headband didn't feel heavy on top of my head. I wore the Arctis 1 for hours at a time without feeling the need to take it off.

I handed the Arctis 1 off to a co-worker, who said it was extremely comfortable and soft. He had no trouble wearing it for long periods, and even asked to hang onto it for a little while longer after my review was done.

The Arctis 1 performed admirably for everyday gaming. I could hear directional sound while gunning down foes as Reaper in Overwatch, and distant battle cries to redirect my attention in Age of Empires: Definitive Edition. The dialogue and orchestral fare in Baldur's Gate: Siege of Dragonspear sounded crisp and clear, while World of Warcraft sounded, well, like World of Warcraft.

There's no denying that the headset is a little light on bass, so don't expect gunplay or explosions to have a tremendous amount of oomph. And while the sound is balanced, no particular element of the games I tested shone through. The Arctis 1 is competent and pleasant — just don't expect any aural epiphanies in this price range.

As the Arctis 1 is a 3.5 mm headset, one of its biggest advantages is that you can use it with just about any system you own. I was especially pleased with how good it sounded when I played Final Fantasy VII on a Nintendo Switch. The cord is just long enough, and the soundscape does a good job of emphasizing both music and sound effects.

On the other hand, there's the microphone, which is functional but certainly not as good as what you'd get in a higher-end device. My voice came through clearly, albeit with a bold, husky quality to it.

However, the mic wasn't very selective about what sound it picked up, and I heard a ton of typing from adjacent desks and conversations from nearby co-workers. You could use this mic for online games, provided that your home isn't too noisy, and you're willing to mute the mic when it's not in use.

What usually sinks cheap gaming headsets is that they're almost useless for listening to music. That's thankfully not the case with the Arctis 1. While it's not going to give you a concert-hall experience, this headset lets you hear every part of the music you're listening to, from bass parts to rhythmic instrumentals to clear vocals.

I tested the Arctis 1 with music from Old Crow Medicine Show, Flogging Molly, The Rolling Stones and G.F. Handel, and while I wasn't impressed with any of the sound, I was pleased with all of it. The headset presented a fairly good balance among lead voices, harmonies and instruments, particularly in treble, vocal-heavy songs.

As in games, the bass here is not nearly as satisfying as it could be, but it also doesn't have that hollow, faraway sound that's common to gaming headsets in this price range.

In spite of a few reservations about its design and its mic, the Arctis 1 is probably the best gaming headset you can get for $50. It handles both music and games with aplomb, and it's comfortable to wear, even though the fit isn't perfect. The Arctis 1 establishes what the baseline for budget headsets should be; now let's see how other companies choose to innovate.