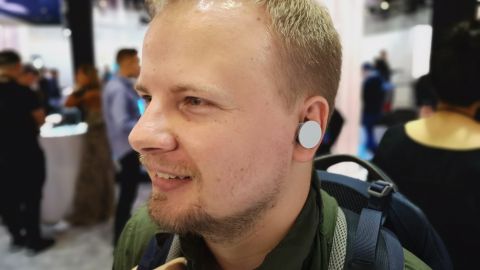 The Surface Earbuds beat the AirPods on battery life and features, but the look may turn some off

Talk about making a statement. While most wireless earbuds are small and almost disappear in your ears, Microsoft's new Surface Earbuds are pretty huge. Oh, and they cost a lot more than AirPods.

But don't write these off these wireless earbuds. They offer longer battery life than the AirPod, a bigger surface area for making gestures and even the ability to transcribe your words in real time.

We got some ears-in time with the Surface Earbuds and were impressed by their sound quality and comfort, even if we're not yet convinced that these are AirPod killers.

I hope you've saved up. The Surface Earbuds, announced at the October Microsoft Surface event, will cost $249 when they arrive this holiday season. For comparison, Apple's AirPods cost $199 and the Jabra Elite Active 65T cost $189.

In fact, it almost felt as if I wasn't wearing them after I inserted them into my ears with a quick twist. That is thanks to the shape of the earbud's nozzles and their shallow insertion. Still, these are heavier than the AirPods and my colleague Mark Spoonauer said he felt the buds weighing a bit on his ears.

Don't worry about having big or small ears. Microsoft will supply removable tips in three sizes: small, medium and large. I was told that medium should work for most folks, and, alas, it was the best pick for me.

The Surface Earbuds will also have a charging case and one-click pairing, so Microsoft is clearly doing its best to compete with Apple's AirPods.

These big, loud and crowded event spaces are never a good environment for testing gadgets.

Regardless, the Surface Earbuds impressed in my short ears-on demo. Hozier's "Almost (Sweet Music)" had a surprisingly hefty bass thump and the lead singer's vocals were clear.

That said, these earbuds don't have active noise cancellation or noise isolation like the upcoming Amazon Echo Earbuds, and because the Surface Earbuds don't insert deep into your ears, ambient sound sneaks in.

We'll have to do a lot more testing to form a more definitive conclusion about the Surface Earbud's sound quality, but so far so good.

The coolest feature of the Surface Earbuds is how it's got a ton of app integrations. Just a couple of taps and swipes will enable you to open Spotify and start playing the music you want to hear.

I got to test the basic gestures with a Windows PC: double-tap for play/pause, swipe up/down to adjust volume and press and hold to wake Cortana. The smooth, flat surface of the Surface Earbuds is very sensitive, so even a light tap did the trick. I had to learn not to accidentally brush the edges of the buds when trying a gesture. Once I got the hang of it, my success rate of using gestures to perform tasks was almost 100%.

I'm personally glad Microsoft is using gestures instead of buttons. There's nothing less comfortable than pressing a large plastic gadget into your sensitive ears.

My colleague got a chance to test drive two other features. Fist, he had no problem asking Cortana the weather. The cooler feature is the ability to speak and have your words transcribed on the fly as captions in PowerPoint. The Surface Earbuds messed up one word, but that's totally understandable given the noise levels at Microsoft's event.

The Surface Earbuds will last 8 hours on a charge, which is among the longest battery life of any wireless earbuds. By comparison, the AirPods last only 5 hours between charges. The charging case can hold 24 hours worth of charge, or three full charges. Again, we'll have to test this to see if they hold up to that ambitious claim.

We only got a brief session with the Surface Earbuds, but, so far, they're on track to live up to their lofty $249 price in terms of features and battery life. From what I've seen (and heard) the Surface Earbuds offer excellent comfort, good audio quality and intuitive gestures.

The biggest question mark for the Surface Earbuds is the design. These buds are large and some may be turned off by the oversized circular look. We'll need to put the Surface Earbuds through a lot more testing, so look for a full review sometime this holiday season.