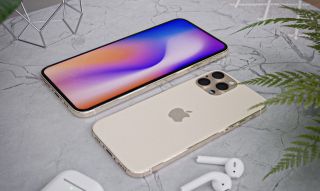 The iPhone 11 just came out but iPhone 12 rumors are already rampant. Why? Because we are never content and we like to overdose on eye candy and because we already want the 5.4-inch iPhone 4-style iPhone 12.

According to rumorologist and concept phone artist Ben Geskin and Smazizg, “one of the 2020 iPhone prototypes has a 6.7-inch display with Face ID and TrueDepth camera system housed in the top bezel.” There you have it: new prototypes already making the round through Asian suppliers.

Accurate Apple analyst Ming-Chi Kuo already pointed out that the 2020 iPhone will be “significantly redesigned”. Geskin concept art is based both on his self-described “exclusive” report and on Kuo’s latest predictions.

On September 8, Kuo said that the iPhone 12 will be a total departure from the tired iPhone 6 curved body introduced in 2014, which has been the chassis for every iPhone until the iPhone 11.

What we didn’t know until last week — at least according to Kuo — is that new iPhone 12 will feature a flat metal band design similar to the iPhone 4, a device with such a good design that it became an instant classic the minute it leaked. It was so good that it got picked for the design collection of the Museum of Modern Art in New York City.

In his report, Kuo claims that “the new 2H20 iPhone design will change significantly [...] The metal frame and the front and rear 2/2.5D glass are still used, but the metal frame surface will be changed to a similar design to the iPhone 4, replacing the current surface design.”

A smaller iPhone at last

Kuo also claims that the design will bring size changes. There will be a 6.7-inch phone — bigger than the current 6.5-inch iPhone 11 Pro Max. And, also as previously reported, there will be a smaller iPhone instead of the 5.8-inch iPhone 11 Pro: a 5.4-inch iPhone 12 that looks positively tiny — and oh-so-sweet — compared to the Max model. I don’t know if the smaller size would have a camera on top or a notch or what. We can only hope it doesn’t have the latter.

In his latest note, Kuo also says that the design change is not a matter of just aesthetics. The “all-new form factor design” is connected to the new antenna’s performance, a redesigned device that combines Ultra-Wide Band, Bluetooth and 5G support.

According to MacRumors, “Kuo believes the grooving and injecting of the metal in next year's iPhone frame will reduce the negative impact of metal shielding on the high-frequency transmission efficiency of the internal antenna, while the use of sapphire or tempered glass on the groove will serve to protect the injection molded structure.” Whatever that means, friends! We can only hope that, unlike the iPhone 4, this one doesn’t require to be held “right”.

One last thing: the Cupertino company seems to be thinking about making the iPhone’s Apple logo glow, just like the MacBook Pros used to do. A recently published patent describes a way to turn the logo into a light that will pulsate whenever you get a notification. It seems like a terrible idea to me, but if people are excited about adding more stress to their lives, bring it on (as long as I can turn it off).

Of course, all these rumors and concepts are very early in the game but, on the other hand, last year they started pretty early too and  were spot on. I just hope that, whatever Apple does, it gets rid of that camera patch and the goddamn notch.