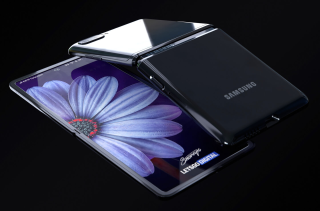 We are starting to get a better picture on the Samsung Galaxy Z Flip — aka Galaxy Bloom aka Galaxy Fold 2 — beyond its official name and its rumored processor. But today we got some more (allegedly leaked) information about its screen, the battery capacity and its charging speed.

According to SamMobile, the Galaxy Z Flip battery is reported to be a hefty 3,300 mAh. If true, it would be much better than the Motorola Razr (2,510 mAh)— especially when the other rumor is that the Samsung Galaxy Z Flip will have a secondary 900mAh (shown below) just to power its secondary display and background operations when the phone is shut.

The other battery-related rumor is the charging speed, which SamMobile has found in a Chinese regulatory filing. Like the Galaxy Fold, it will have a 15W charger on the box. It’s fast but not so fast compared to other current and future flagships.

We don’t know if the Galaxy Z Flip would be able to accept faster chargers, though. For reference, the Galaxy Fold currently supports 15W maximum charging speed. The incoming Galaxy S20 is expected to come with a 25W power adapter.

We also have no idea if the Galaxy Z Flip would charge wirelessly or not.

The other rumor comes from a solid source: Max Weinbach. The XDA Developers’ writer claims that not only Samsung is going to use the ultra-thin glass display to cover its display for added hardness but the Korean company will also add a secondary protective plastic layer.

Weinbach claims that Samsung is cooking this display lasagna to increase the resilience of the device — an aspect that was lambasted in the Samsung Galaxy Fold. We can only hope that the reviewers don’t try to pull the plastic protector off — although maybe this one will be user replaceable. We don’t know that yet.

The only other thing we know more or less for sure is the fact that Samsung will use a Qualcomm‘s 2019 flagship Snapdragon 855 processor as opposed to the Snapdragon 865 in the Galaxy S20. If true, this would be a lot better than the mid-range CPU in the Motorola Razr.

So far, it seems that Samsung is on its way to best the (internet) popular Razr on the spec front.

We still don’t know other information, like the resolution of the display and the back camera (the rumored spec for the selfie camera is 10MP), as well as its recording capabilities. We are also clueless about memory (the S20 is supposed to come with 12GB across the entire line) and storage.

The phone is coming up in less than a month, so I’m sure we will keep learning new details in the next few days.