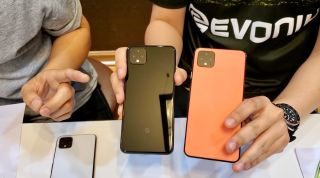 Google's Pixel 4 will be unveiled at a special press event on Oct. 15. But a newly leaked video shows us everything we want to know about the device—and how it compares to the iPhone XS Max.

The YouTube channel ReLab has published a new video comparing the Google Pixel 4 XL to the iPhone XS Max.

The video starts with a look at the rear of the Pixel 4 XL. The device in question comes with a white backplate (though orange and black are also rumored) and a black spine that adds a little extra design flair to the design. There's a square camera bump at the top of the phone, as well as a Google logo towards the bottom.

Following rumors we've seen recently, the phone also has an orange button on the side. The front of this phone doesn't look so hot. Unlike iPhone and Galaxy competitors, the Pixel 4 XL in the video, which hasn't been confirmed for its accuracy, comes with thick bezels all around. This bezels are especially thick around the earpiece and chin when compared to the iPhone XS Max.

Check out our Pixel 4 hub page to get up to speed on all of the rumors and leak ahead of Google's October event.

In the ReLab video, the host then moves to compare the iPhone XS Max to the Pixel 4 XL's camera interfaces. The host also reveals that the camera can record in 4K, offers a low-light mode, and a Motion mode to capture live photos.

The video then turns to a comparison of photos taken with the Pixel 4 XL and the iPhone XS Max. And as you might expect, Google's Pixel 4 XL performs quite well.

However, the Google Pixel 4 XL won't be going against last year's iPhone XS Max. Instead, the device will be competing against the iPhone 11 Pro and iPhone 11 Pro Max. And based on our reviews of these phones, the photo quality offered by these triple-camera phones surpasses the Pixel 3. So Google has some catching up to do.

But before we rush to conclusions and compare the Pixel 4 XL in the video to the iPhone 11 camera, it's important to note that we don't know for sure whether the device in the video is the real thing. And since ReLab acknowledged that the device it reviewed is a "demo" version, it's possible it'll have better performance when it ships next month.