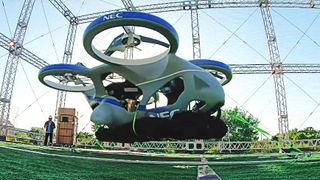 If you simply cannot survive another minute stuck in a traffic jam, you may be dreaming of owning a flying car. And that dream just got one (small) step closer to reality.

Though the concept of flying cars has long been "just a few years away," the Japanese electronics maker NEC Corp. presented a Back to the Future-esque spectacle on Monday in Toyko where it tested a large flying machine capable of carrying people.

In the demonstration, the battery-powered, drone-like vehicle flew 10 feet high, where it hovered for about one minute before descending to the ground. The machine, which features four giant propellers, was flown in a cage during the test as a safety precaution.

Amid growing interest from companies like Uber, Airbus, and Boeing in flying vehicles, NEC Corp.'s successful test may spark a significant push for competition in the air travel market. Chinese company eHang promised us commercialized drone taxis back in 2016, but the technology has yet to take off. According to Bloomberg, the Japanese government has expressed explicit interest in the country becoming a leader in flying cars, and the current technological roadmap suggest such machines will be shipping by 2023.