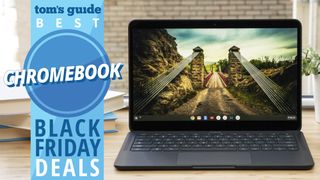 Chromebooks are already some of the most affordable laptops out there, and now that Black Friday deals are here, there's never been a better time to snag one for cheap.

We've found massive discounts on Google's own devices. Best Buy is selling the Pixel Slate at just $449 ($350 off) while the Pixelbook is $352 off at Best Buy. Another great deal is on Samsung's Chromebook 3, which is selling at Best Buy for just $89.

We recommend bookmarking this page if you want to keep up with the latest Chromebook Black Friday deals, as we'll be updating it around the clock.

If you need a laptop with more power than what a Chromebook can offer, check out our main Black Friday deals hub for sales on Windows 10 laptops, MacBooks, tablets, peripherals, and all sorts of other gadgets. And keep our Cyber Monday deals roundup handy for when a new wave of savings kicks off next week.

Samsung Chromebook 3: Was $200 now $140 @Amazon
This Samsung Chromebook 3, one of our favorite budget machines, has an Intel Celeron N3060 CPU, 4GB of RAM and a 16GB SSD, enough horsepower for streaming and working in the cloud. It also has a spill-resistant keyboard, great for accident-prone users.View Deal

Google Pixel Slate (Core m3): Was $799 now $449 @Best Buy
Google's first attempt at a tablet, the Pixel Slate has an elegant design, a sharp 12.3-inch screen and a comfortable keyboard (sold separately). It also lasts 10 hours on a charge. This model has an Intel Core m3 CPU, 8GB of RAM and a 64GB SSD.View Deal

Samsung Chromebook 3: Was $299 now $165 @Amazon
This trustworthy but no-frills Chromebook, slightly different from other Chromebook 3s on this page, has an Intel Celeron N3060 CPU, 4GB of RAM and an 16GB SSD, and weighs just 2.5 pounds. View Deal

Acer Chromebook Spin 11: Was $299 now $229 @Walmart
As the name suggests, the Acer Spin is a convertible and can transform from a traditional laptop to a tablet. In addition to its 11.6-inch screen, this Chromebook packs an Intel Celeron N3350 CPU, 4GB of RAM and 32GB of storage.View Deal

Samsung Chromebook 3 11.6": Was 189 now $89 @Best Buy
It doesn't get much cheaper: $100 off what is already one of the least expensive laptops on the market, a low-end Chromebook 3 with an Intel Atom x5 CPU, 2GB of RAM and 16GB of eMMC storage. This Chromebook is a great option for kids. View Deal

HP Chromebook 11 G6 EE: was $269 now $190 @ Walmart
It's bonkers that Walmart's lashed 30% off the price of this HP Education Edition Chromebook. Especially when it's got a durable design with co-molded rubber contact points, and strengthened corners. View Deal