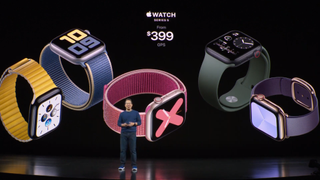 Apple just fixed one of the most annoying issues with the Apple Watch.

The $399 Series 5, available to order today, sports a brand new always-on display that makes Apple's smartwatch simply more useful at being a watch.

The Series 5's display technology makes it possible to always see your watch face and complications without any drain on battery life. The new Apple Watch lasts 18 hours on a charge--the same as the Series 4--Apple says.

The always-on Retina display is the biggest new feature in the Series 5. The two-day battery life and sleep-tracking capabilities that were rumored to be coming to the newest model were just rumors, which means Fitbit's founders can breathe easy (for now).

The Series 5 has a few new tricks (and new colors) that might make it worth the upgrade for Series 3 owners. Here's what else to expect when the watch goes on sale in stores on Sept. 20.

The Apple Watch Series 5 now sports a compass, which makes it a better companion for outdoor adventuring. You can add the compass as a complication to your watch face so you can always see which direction is magnetic north.

In the Compass app on the watch, you can see latitude, longitude, current elevation and incline. Third-party developers will be able to take advantage of that data in their apps, too.

When you're traveling overseas with the $499 LTE Apple Watch Series 5, you'll be able to call for help by pressing the side button — even if you don't know the local emergency services number and your iPhone is nowhere to be found. This should offer peace of mind to international travelers.

Apple is bringing back the ceramic white finish to the Series 5, in addition to new natural brushed titanium and space black titanium models.

The classic gold, silver and space gray aluminum finishes Apple has used for past watches will also be available. Now that aluminum is 100% recycled, for eco-conscious buyers.

Stainless steel is also sticking around in gold, space black and a polished silver.

And, of course, Apple is adding new bands to the lineup, including some beautiful Hérmés options.

Apple is now allowing Apple Watch buyers to pick a finish and a band to buy in stores, rather than forcing you to buy the options that come in the box. Don't want a sport band with your aluminum watch? You'll be able to customize the style of band before buying.

The ever-popular Apple Watch Series 3 is still available to buy, now for $199 (down from $279). The Series 3 is often on sale for that price through third-party retailers, but now Apple is making it official.

To follow on the heels of the successful Apple Heart Study, which enrolled more than 400,000 users, the Apple Watch will have a new app: Research. While it sounds a little bit like homework, using the Research app on the Series 5 will give medical researchers insight into health data they otherwise wouldn't be able to get.

The noise decibel-monitoring and women's cycle-tracking features coming in watchOS 6 will enable the Apple Hearing Study and Apple Women's Health Study. (Apple doesn't have access to any identifying data from those studies.) The company is working with research institutions such as the University of Michigan and Harvard's School of Public Health to make those studies possible.

The studies will be open to the public later this year.

The Apple Watch Series 5 is a slight upgrade from the Series 4. It has all of that watch's sophisticated health and fitness features, including the ECG app for detecting atrial fibrillation and fall detection alerts. It offers a few extra bells and whistles, such as gorgeous new finishes and a Compass app, but other than that, the Apple Watch's biggest changes are coming with a software upgrade, watchOS 6, that will be available to Series 3 and Series 4 owners, too.

Stay tuned for a full review to see if the Series 5 is a worthy upgrade.