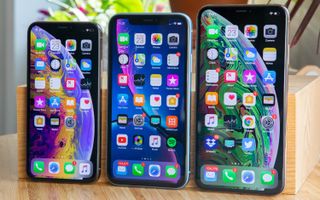 A recent leak said we should expect an iPhone 11 Pro as part of this year's trio of iPhone 11 handsets. But now a case manufacturer’s website has revealed what could be the names of all three new models.

The new iPhone’s names were spotted by iPhoneSoft (via 9to5Mac), a French website, which saw the titles iPhone 11, iPhone 11 Pro and iPhone 11 Pro Max appear on the site of ESR, a phone case maker. You can see them in the image below, where they describe a host of compatible cases and screen protectors that ESR sells.

Based on the previous leak, we had assumed that the iPhone 11 Pro was going to be the top of the three models, a replacement for the ‘Max’ suffix. However, it now looks like the model name that could be disappearing is the entry-level iPhone 11R.

According to the listed in the above image, the standard iPhone 11 will have a 6.1-inch display, the iPhone 11 Pro a 5.8-inch display and the iPhone 11 Pro Max a 6.5-inch display. This maps onto the iPhone XS and XR and XS Max’s display sizes, which makes it easier to identify their places in the range, but also reinforces the general pessimism about how the new iPhone isn’t going to be that big an update to the XS.

Based on rumors and leaks, the regular iPhone 11 will feature an LCD screen and two rear cameras, while the iPhone 11 Pro and iPhone 11 Pro Max will sport OLED displays and three rear cameras. The two Pro models may also offer Apple Pencil support. All three new iPhones will reportedly have a fast new A13 Bionic processor.

As the dummy handsets for the iPhone 11 series have been seen already, it’s likely that case manufacturers and other companies that rely on Apple’s products for their own have an accurate idea about what’s happening with the upcoming Apple smartphone. There’s a chance they’re still wrong though - after all, Apple’s surprise move to announce the iPhone 8 and iPhone X at the same time caused many case makers to misprint the first run of their labels and packaging,

To make sure you’re up to date with everything iPhone 11, check our rumor round-up which we regularly update with news and leaks about the next Apple smartphone, whatever it may be called.