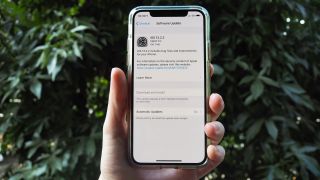 iOS 13 is packed with productivity features, but one bug threatened to undo it all: Apple’s latest software for iPhones and iPads killed background app refreshes, so switching between apps caused a full reload. That’s not ideal when you’re trying to multitask. But a software update out today (Nov. 7) should fix the issue.

iOS 13.2.2 will make it easier to bounce between apps — say, watching videos in Safari and sending emails — on your iPhone without losing your place and having to start from scratch. On iPads, the issue was the same, but the effect was more serious: Being unable to use an iPad Pro while doing any task that required processing power was a huge hindrance to using the tablet for pro-level work.

What was causing the problem? iOS 13 wasn’t managing RAM properly, and iOS devices already have a small amount (compared to similarly priced Android rivals) to begin with. The update fixes that management.

Apple has been working quickly to improve iOS 13, which just launched in September. The third major update, iOS 13.3, is already in beta for both developers and the public, with Screen Time communication limits and other features in the works.