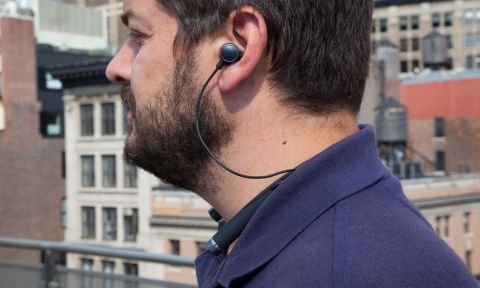 LifeBeam's Vi headphones have a built-in virtual trainer for runners; it shows promise, but it's very limited.

Can a pair of headphones be as good, or at least almost as good, as a real-life trainer? Having tested several high-tech wannabes, I was skeptical of LifeBeam's Vi trainer headphones. After using them over a few weeks and nearly 40 miles of running, I found these $249 buds to hold a lot of potential, but I wish they could do even more.

The Vi earbuds connect to a U-shaped piece that wraps around your neck. In the past, I've shied away from using similar-style headphones because they've looked bulky. However, I barely noticed these buds, which weigh 1.3 ounces, on my runs.

The neck piece is wrapped in a soft-touch finish that's very comfortable and easy to grasp, especially when your hands are sweaty. On the right arm are volume controls and a multifunction button. All were easy to press.

The right end cap pops off to reveal a micro-USB charging port. The metal ends of the neck piece, as well as the earbuds, are magnetic, and they snap together to avoid tangled wires.

The earbuds ship with a carrying case and a small box that contains four sizes of tips and two sets of wings, which help the buds stay in your ears while you're running. The buds formed a tight but comfortable seal in my ears and did a good job of blocking ambient noise; the company said it's working on a feature that would let you hear what's going on around you.

Before you decide to run off and buy the Vi headphones, make sure you like running. The Vi training app is limited to four choices: free run, distance run, time run and cycling. You can also set your goal as lose weight, improve fitness, go farther, go faster, reduce stress or maintain fitness.

Although it's good for people who are looking to improve their form or run faster or longer, Vi does not coach you through strength training or yoga.

The Vi virtual coach is a very friendly female voice. Of all the virtual trainers I've used, Vi was by far the most encouraging; it cheered me on at every mile and complimented me on my consistent pace. Some of the commentary was a bit on the corny side, but it was always delivered with a positive attitude.

One nice little touch with the app is that, even after you press the button to start a workout, it won't start it until you actually begin running. I didn't have to worry about having to jam my iPhone into my shoulder strap after pressing the Start button. And it took only a few strides for the app to recognize when I had started and stopped running.

Vi requires you to use the app for about 120 minutes for it to  gathers enough information on you to provide a tailored plan. However, even on my first run, the virtual trainer offered tips to make me a better runner. When I was about a mile into my run, it noted my steps per minute (159) and suggested an increase to 164, which supposedly would lessen the impact on my joints. Then, it laid down a beat and told me to run in time with it.

On my next two runs, the virtual trainer had me slowly raise my stride rate to 174 per minute, which it said was the perfect rate for me. If I didn't hit that beat, the trainer encouraged me to try again; if I still didn't reach it after another minute or so, it told me — in a slightly dejected voice — to try again sometime.

Also on the initial runs, Vi recommended I try breathing patterns and swing my arms a bit.

However, after the initial period, the headphones didn't give me nearly as much voice guidance. For instance, it stopped asking me if I wanted to try increasing my stride rate, which remained in the mid-160s range on subsequent runs. And, even though I set Vi to its chattiest level, I didn't hear anything new or insightful about my running. Vi said this is by design, but that you can manually request the step count by tapping the right earbud and saying "Step to the beat."

In the app, you can specify after each mile (or kilometer) whether you want to hear your average step rate, heart rate, pace, power, speed, calories burned and vertical climb. Annoyingly, though, you're limited to one choice. More established running apps, such as MapMyRun, tell you several stats at each mile.

You can also interact with Vi by asking measures such as your heart rate and steps per minute. First, you have to tap the right earbud, and then you speak after you hear a tone. However, the tone is long — about 2 to 3 seconds — and it trails off, so there's a real temptation to start speaking too early.

You're also fairly limited in what you can ask the coach. You can ask it to tell you your heart rate, get a summary of your progress, start a beat for you to increase your steps per minute and stop in-run coaching.

Perhaps the most interesting command is for Vi to create and start a Spotify radio station based on the song you're listening to. However, that's about it: You can't tell Vi to start or stop a workout, or use Siri or Google Assistant. Though that's good for now, I'd like to see more voice commands become available.

The microphone in the Vi was sensitive enough so that a person calling could easily hear me when I was outside; he said I sounded a little distant, though.

Jamming to the Music

My music sounded good coming through the Vi's Harman Kardon earbuds, but I wish they gave a bit more on the low end. I missed the driving bass lines of some of my favorite running tracks. A bass boost in the Vi app helped a little.

LifeBeam says the Vi headphones' battery should last 7 to 8 hours before needing to be recharged. That estimate is roughly accurate; I took the Vi headphones on three runs, and listened to another 3 to 4 hours of podcasts during my commute, before the battery died.

Of all the virtual trainers I've tried, the Vi headphones have the most promise, but they've got a long way to go. When I first started using the headphones, I was pleasantly surprised by the peppy, encouraging voice, and the guidance to get me moving faster. I also liked that I could issue various voice commands to check on my progress.

However, the longer I used the Vi headphones, the less useful and less frequent the coaching became. They were really disappointing after their very promising start. Hopefully, LifeBeam can add more training and extend the usefuln