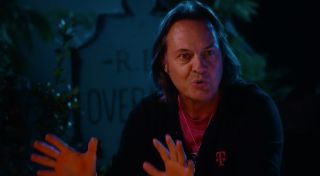 A major drain on monthly data may soon disappear for T-Mobile subscribers. The pugnacious carrier is reportedly planning to no longer count video streaming from select services against monthly data allotments, much in the same way it already allows T-Mobile users to stream music from many providers without using up any data.

T-Mobile's next Uncarrier event is scheduled for Nov. 10 in Los Angeles. The carrier sent out press invitations this week. Past Uncarrier events have seen T-Mobile eliminate two-year contracts, add Wi-Fi calling and introduce early upgrade programs among other maneuvers.

T-Mobile isn't commenting on the rumor, other than CEO John Legere inviting Blass to the Nov. 10 event to "see if [his] sleuthing paid off." But allowing subscribers to stream video without taking a hit on their data plan would fit in with T-Mobile's history of putting the pressure on competing carriers. And not to read too much into T-Mobile's choice of venues, but the Shrine Auditorium where next month's Uncarrier event will take place has also hosted the Academy Awards.

It's unclear exactly how many video services would be included should T-Mobile make video streaming free to its subscribers. Blass specifically mentions Netflix and HBO in his tweets, but other services such as Hulu and YouTube also account for a lot of the bandwidth eaten up by mobile users.

There's a precedent for T-Mobile making video streaming free for some services. It did the same thing more than a year ago for music streaming. In June 2014, T-Mobile launched its Music Freedom offering that let subscribers stream music from eight services without it counting against their monthly data allowance. T-Mobile has since expanded Music Freedom to support 33 music streaming services.

The Uncarrier announcements have played a key part in T-Mobile's effort to close the gap between itself and the larger wireless carriers Verizon and AT&T. And the moves seem to be paying off, at least when it comes to attracting subscribers. During the third quarter of 2015, T-Mobile said it added 2.3 million customers.