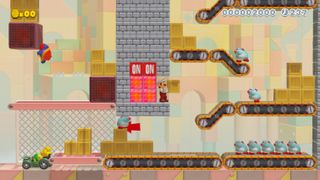 To say I was obsessed with the original Super Mario Maker would be an understatement. I lost an ungodly number of hours creating my own Mario levels and taking on the community’s sadistic creations on my Wii U. I even lobbied hard for Super Mario Maker to become our top game of 2015. Needless to say, I’m a bit excited for Super Mario Maker 2, which brings the level-building action to Nintendo Switch on June 28.

Fortunately, Super Mario Maker 2 is shaping up to be everything I’ve wanted from a Mario Maker sequel, offering new creation parts like slopes and go-karts, online and local multiplayer and a full-on story mode filled with Nintendo-created courses. After spending 90 minutes with Nintendo’s new DIY platformer, I’m desperately itching for more of what could be one of the best Switch games yet.

After spending upwards of 100 hours creating levels on the Wii U GamePad with a stylus in the original Super Mario Maker, I was a bit nervous about how that experience would translate to the multiple play modes of the pen-less Switch. Creating levels in TV mode felt a bit jarring to me, as you have to use a combination of the left analog stick and d-pad in order to alternate between adding pieces and navigating menus.

Fortunately, once I undocked the Switch and started sketching out some basic levels on the system’s touchscreen, I felt right at home. Laying out terrain and adding items and enemies with just my finger felt surprisingly intuitive, in part thanks to the subtle, satisfying rumble that the Switch emitted every time I laid down a chunk of land. The creation interface got some nice quality-of-life updates, too. For example, your most frequently used pieces are now immediately accessible from the top of the screen, so you won’t need to dig through a menu over and over again just to lay the same section of pipe or add another question block.

I had a lot of fun messing around with Super Mario Maker 2’s new creation pieces, which include slopes that Mario can slide down, on/off switches that let you activate and deactivate platforms, and night modes and adjustable water levels, which let you introduce new hazards. The game lets you add a myriad of win conditions to your course, from defeating a certain amount of goombas, to collecting a set number of coins before you can reach the finish line. I also like that you can now set the playable character to beMario, Luigi, Toad or Toadette, because playing as anyone other than Luigi is wrong.

My time with creation mode was short, but I was able to whip up a fun little snow level, filled with speedy slopes as well as an on/off trap that allowed me to erase the ground beneath a giant Bowser before clearing the course. My mind is already racing with ideas for how to use Super Mario Maker 2’s new tools, and I can’t wait to spend hundreds of hours creating new stuff.

I also played a bit of Super Mario Maker 2’s Story Mode, which has you play through more than 100 Nintendo-made levels as you help Toad and Toadette rebuild Peach’s castle. The handful of story levels I played felt like they could have been ripped out of a core Mario game, and did a nice job showing off the kinds of things you can do in creation mode.

But what really stood out to me was getting my first taste of the new Super Mario 3D World theme, which does a brilliant job bringing the colorful aesthetics and unique mechanics of the 2013 Wii U adventure to a 2D plane. Just like in the game it's named after, the 3D World theme lets you do things like don a cat suit to climb walls, and drive a Koopa Troopa Car. While the returning Super Mario Bros. Super Mario Bros. 3, Super Mario World and New Super Mario Bros. themes all still look and play great, I have a feeling I’ll be spending most of my time creating and playing with the new 3D World toybox.

Super Mario Maker 2 will once again have Course World, which is the core online experience that lets you play and share an endless array of user-created levels. New Course World features include the ability to tag levels with labels like “speedrun” or “puzzle,” customizable Mii characters that serve as your creator avatar and a new Endless Challenge mode that lets you go after the online leaderboards by clearing as many random stages as possible.

Since there aren’t any active players to populate Course World yet, my pre-release demo let me try a special version of the online environment filled with sample levels built by Nintendo. These provided a good taste of the kinds of inventive torture that the Mario Maker community is famous for creating, from a bullet-hell level that has you dodge an endless array of cannonballs, to a tricky puzzle level that forces you to use bob-ombs to clear chunks of ice. Like with the original game, Course World levels show the course’s clear rate and points out where other players have died, so you’ll know when to brace yourself for a rough time.

One of the biggest additions to Super Mario Maker 2 is multiplayer, which allows up to four players to run through courses either cooperatively or competitively, online or offline.

If you’ve played the New Super Mario Bros. games with a group of friends, you’ll know what to expect here. Even if you and your pals are working together, the action can easily devolve into total chaos as you and your teammates accidentally kill one another while trying to progress.

My hands-on multiplayer demo was filled with a lot of gleeful shouting, as my cohorts and I scrambled to collect 100 coins in our cat suits without accidentally knocking each other into the giant, Mario-eating fish that surrounded us. I already look forward to having similarly chaotic times with my friends at home, both online and on the couch.

It’s a small touch, but I also appreciate the new multiplayer visuals: for example, seeing Player 4’s Toadette rendered into the 16-bit world of Super Mario World was a real treat. And speaking of multiplayer, you’ll also be able to create levels in real time with a friend locally, which seems like a great way to ease younger players into the building process.

I would have been happy enough to have a slightly upgraded version of Super Mario Maker on my Switch, but Nintendo went the extra mile and made Mario Maker 2 a true sequel, brimming with compelling new content. The new creation and social tools are a big step up from those in previous game, and I’m eager to see the rest of the handcrafted challenges that await in story mode. And then there’s multiplayer, which, like any great Nintendo game, seems like it has the potential to both strengthen and end friendships.

I still haven’t quite wrapped my head around creating levels with a controller, and the game will ultimately live or die by the online community that surrounds it. But if the still-active Super Mario Maker scene is any indication, we should have years’ worth of fun, creative and straight-up sadistic Mario courses to play after the game arrives on June 28. Until then, I’ll be daydreaming about all of the inventive ways in which I plan on torturing my friends.