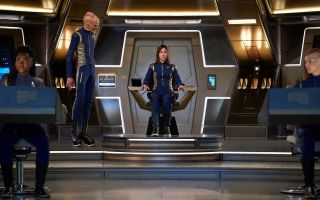 Star Trek: Discovery is one episode into its second season, and we've already encountered Capt. Pike, Mr. Spock, the old-school Starfleet uniforms and the U.S.S. Enterprise itself. The message seems clear: This is your father's Star Trek.

Star Trek: Discovery's Season 2 premiere episode, "Brother," didn't sacrifice any of Season 1's fast pacing, intense action scenes or ambitious cinematography. The show still looks darker and sleeker than any other Star Trek series, and moral philosophy still takes a backseat to character arcs and mysterious plot hooks. But at the same time, it's much more comfortable with its place in the Star Trek canon than the Season 1 premiere, and that works in its favor in a big way.

In a lot of ways, Star Trek: Discovery feels more settled now than it did in Season 1, but those (initially) lower stakes could wind up working in its favor. To excel, the show will need to face some philosophical quandaries and scientific futurism head-on — and the premiere didn't have much of either. However, "Brother" demonstrated that Discovery is very eager to draw on the franchise's long and storied legacy, and if it embraces classic Trek's characters, ships and aesthetics, then the thought-provoking lessons can't be too far behind.

In case you haven't seen the premiere — well, first off, you should probably watch it. But to recap, briefly: Capt. Christopher Pike (Anson Mount), lately of the U.S.S. Enterprise, has taken command of the U.S.S. Discovery. He's hunting down seven mysterious signals all across Federation space, and wants Michael Burnham (Sonequa Martin-Green), Saru (Doug Jones) and the rest of the crew to help him.

The first signal leads the Discovery to a Starfleet medical team in need of rescue on a dangerous asteroid, which becomes an opportunity for Pike to demonstrate his command style, and for Burnham to sort out her feelings about Spock (Ethan Peck): Pike's science officer and Burnham's foster brother.

By the end of the episode, the Discovery is no closer to finding out just what the mysterious signals mean, but Pike has agreed to take command of the ship in pursuit of answers, and the crew seems at least tentatively ready to follow him.

First, a caveat: It is much, much easier to launch a season than to launch an entire show. But even with that in mind, the Discovery Season 2 premiere is much better than the Season 1 premiere on a lot of levels. The adventurous, exploration-focused mission feels much closer to classic Star Trek, as does kicking things off with a rescue mission rather than a galactic war.

But "Brother" also does a lot of things that "The Vulcan Hello" and "The Battle at the Binary Stars" didn't. It introduces us to the central cast and main story of the season without a two-episode prologue. It has a bright aesthetic and characters who seem to like working with each other. And, most importantly, it works with existing Star Trek canon rather than trying to circumvent it. (I am looking at you, T'Kuvma and Klingon death cult.)

While I am not even slightly averse to Star Trek reinventing itself (it's reinvented itself ten times already, if you count each new iteration of shows and movies), the crux of the franchise is its storytelling. When you kick off a season with "get ready for an enormous war while we introduce you to the cast and setting," you're asking the audience to take in a ton of information at once.

You're also setting the stakes fairly high without giving the audience a reason to invest. Remember: At the beginning of Season 1, Burnham was arrogant and mutinous, while Saru was uptight and inflexible. No other major characters carried over between the premiere and the main story arc.

Compare and contrast "Brother," in which we already know the characters, the ship and the general state of the galaxy. Chasing down signals feels like an exciting mystery to be solved rather than a life-or-death situation. Star Trek has always been more at home with exploration than with warfare, and that seems to be exactly what the crew is setting out to do.

In fact, the only real monkey wrench in the proceedings is the introduction of Capt. Pike — and the crew is just as skeptical of him as the audience is. After Capt. Gabriel Lorca's betrayal and deception last season, the crew is hesitant to trust a newcomer, and reluctant to let Cmdr. Saru leave the captain's chair.

But Pike goes out of his way to reassure them that he will be different, and then proves it. In one particularly well-executed scene, he asks for everyone's names just before dropping into a situation that will require tight coordination. The crew complies, almost too quickly for the audience to track.

Pike proceeds to rattle off every officer's name effortlessly, giving them reasonable orders and asking for suggestions when he is unclear on how to proceed. Just as we learned way back in "The Cage" and "The Menagerie" (Pike's only appearances in Star Trek: The Original Series), Pike has little patience, but a lot of understanding. It endears the captain not only to his crew, but to the viewers at home as well.

The show also draws upon plenty of classic Star Trek characters and ships to flesh out Burnham's backstory. Sarek (James Frain) and Amanda Grayson (Mia Kirshner) show up, as does Spock — albeit only as flashbacks and voice recordings, for now. We even get a brief glimpse of the inside of the Enterprise, and it's fun to see how a decidedly '60s set might have looked with modern-day design.

Beyond that, though, what makes "Brother" good are the same elements that made Discovery's first season so successful. The action scenes are both creative and memorable, particularly a sequence where Pike leads an away team through an asteroid field in a group of escape pods. The color palette is gorgeous, from the shimmering reds of a gaseous nebula, to the cool blues and grays in Discovery's interior.

And, of course, there's the camaraderie among Discovery's officers themselves. Now that Burnham and Saru have made peace, it's encouraging to see them cover each other's backs. Lt. Paul Stamets (Anthony Rapp) leans much more heavily on his protege, Ensign Sylvia Tilly (Mary Wiseman). We even get a few more lines and a lot more screen time from the rest of the bridge crew, including enthusiastic performances from Emily Coutts as helmsman Keyla Detmer and Oyin Oladejo as ops officer Joann Owosekun.

There is, of course, one thing that Discovery Season 2 still needs, and that's a moral center. While no one likes a show that beats you over the head with its lesson, Star Trek is at its best when it has something to say about a real-world issue. Whether it's Capt. Kirk waxing poetic about the value of hard work in "This SIde of Paradise" or Cmdr. Tucker standing up for another being's civil rights in "Cogenitor," Star Trek should have something to say about the human condition, and the world we live in now. Even Discovery Season 1 eschewed a huge action finale in favor of a message about peace and understanding.

"Brother" doesn't really have any elements like that, focusing instead on character relationships and setting up a premise. I can live with that, especially since serial storytelling allows creators to seed moral lessons into arcs, rather than cram them into individual episodes. But I do hope that the series is leading up to something bigger than just "follow the signals, solve a mystery."

All that aside, though, Star Trek: Discovery Season 2 is off to a strong start. It's an enjoyable mix of sci-fi, action, and drama — but more importantly, it "feels" like Star Trek. And in a world where it seems like superstition, intolerance and belligerence are on the rise, we need all the Star Trek we can get.