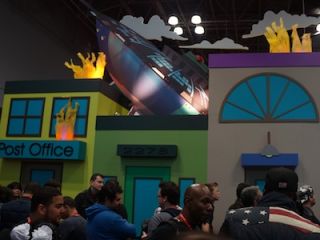 "South Park" fans eagerly awaiting "South Park: Stick of Truth" are in luck at this year's New York Comic Con. Obsidian's "South Park" RPG puts the player in the episode, and we got a first look at what its gameplay will entail.

The graphics are so true to the cartoon that we could barely tell the difference between cutscenes and gameplay. In the level we previewed, we saw Cartman, Stan, Kyle, Butters and Jimmy in the Giggling Donkey — the "South Park" interpretation of a medieval tavern, which is really just a basement.

The "South Park" characters are donned head to toe in fantasy attire, draped in robes and equipped with fantasy RPG weapons including hammers and bow-and-arrows. We see Cartman as the Grand Wizard of the group. Kenny is the damsel in distress who gets kidnapped as soon as the gameplay begins.

During the clip, we saw our main characters take down a trio of bow-wielding enemies. We especially loved seeing Butters knock out his opponents by using the attacks such as "Hammer of Justice" and "Hammer of Storms" in battle.

The best part about "Stick of Truth" is that it remains true to the crude humor and spirit of the renowned cartoon.  In addition to using traditional weapons in combat, players can light farts on fire to burn enemies, and in some instances even use farts as a Dragon Shout-esque technique in a reference to "The Elder Scrolls V: Skyrim."

Rochambeau is one of the move sets you can use in battle — a reference to first season's "Mecha-Streisand" episode. In the same very clip, "Stick of Truth" references another episode from Season 13 when Butters says, "I think I just found my new bottom b-tch."

From what we've seen, a large part of the gameplay in "Stick of Truth" has to do with how you interact with objects around you. For instance, shooting targets along the wall in the Giggling Donkey reveals hidden objects or triggers events in the game.

Unfortunately Ubisoft didn't let us take any photos or record footage of the clip we saw, but we look forward to learning more about "South Park: Stick of Truth" as its Dec. 10 release date approaches.