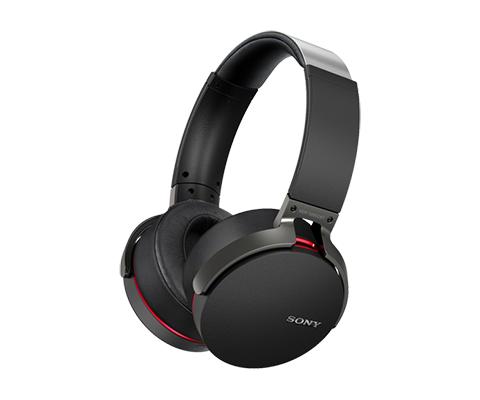 The Sony MDR-XB950BT has impressive audio quality, but it's brought down by outdated style and overpowering optional bass.

Back in the 1990s, I'd sit in parking lots watching car modders tweak their stereos in a quest for the most outrageous and bowel-churning bass. Listening to music on the Sony MDR-XB950BT transported me straight back to those sunbaked days. These cans have some of the most overwhelming bass available sans subwoofer, and their bulky, black design would seem right at home in 1998. Thankfully, a built-in microphone and wireless connectivity via Bluetooth and NFC keep these headphones firmly in the present.

I had no trouble connecting to the Sony MDR-XB950BT via Bluetooth 4.0 on Android or iOS, and audio quality seemed very consistent across multiple devices. I was even able to abandon my phone in one room and make it 20 feet away before the tunes went staticky.

Pairing via NFC, which allows you to play music by touching your phone to the headphones, proved slightly more difficult, but only because I was unfamiliar with the protocol. Once I figured out how to activate NFC on the Android device that I was using, music was just a quick tap away.

Yet, the easiest way to listen was to plug the headphones into my phone using the supplied stereo cable. Once plugged in, the MDR-XB950BT functioned just like a normal pair of headphones, though the Bass Booster function does draw battery power and will stop functioning if the headphones are left uncharged.

However, charging the headphones while listening would be a mistake. The provided USB cord is a devastatingly short 19.75 inches. That's small enough that all but the most Lilliputian of listeners will be required to hunker over their devices to stay connected. It's also more than a foot shorter than the cable provided with comparable wireless headphones, like the $300 Sennheiser Urbanite XL Wireless.

Much like its mouthful of a name, the Sony MDR-XB950BT is utterly lacking in style. Like wedge cork heels and JNCO jeans, these big, bulky, black cans are better off in the time of Seinfeld and The X-Files. That doesn't stop Sony from trying to make them a little fun, though. There's a very thin band of red around each earcup, and the headband is a utilitarian brushed steel that's perfectly functional and mildly more appealing than the cans they connect.

While the MDR-XB950BT will win no points for style, the headphones are a dream when it comes to control. Buttons for volume, Bluetooth, bass boosting and answering the phone are all within easy reach on the earcups, without any learning curve. I had no trouble bumping the bass for some Kanye or answering a call from work while navigating busy city streets.

Unfortunately, I did have issues with comfort. Halfway through a rewatch of Guardians of the Galaxy, I was tugging the headphones away from my ears to keep the cans from pressing too painfully.

This has nothing to do with the weight of the headphones, which is a light 10 ounces compared to the more hefty 11-ounce Sennheiser Urbanite XLs. Nor did it have to do with the size of the band, which is a positively chunky 1.29 inches wide.

It was all down to the clamping force.

As plush as 0.6-inch-deep ear pads are, they can't protect a wearer's comfort in long-term listening sessions. That's a major bummer when you're trying to watch Rocket Raccoon save the bits of the galaxy he hasn't already blown up.

A lot of headphones are wireless nowadays, but few do the bass boosting bit as thumpingly well as Sony's MDR-XB950BT. A digital signal processor built into the headphones can boost the lower frequencies with a press of the Bass Boost button on the earpiece. While that oomph wasn't wanted or needed in the classical Rachmaninoff tunes I attempted to jam to, it was perfectly welcome in techno, hip-hop and even classic rock.

The function added some delightfully decadent oomph to music with a very controlled but heavy bass line, like Talking Head's "Psycho Killer" or Jay-Z's "No Church in the Wild." Less bass-heavy music, like Simon and Garfunkel's "Cecilia," just sounded like it was coming out of juiced-up car speakers. The bass quickly distorted the track, overwhelming the intricate percussion.

That bass distortion was especially noticeable in Soul Coughing’s "El Oso." The song's bass line can be wild with even the most neutral of headphones, but when played through a Bass-Boosted pair of MDR-XB950BTs, the track became unrecognizable. A little bit of bass can be a good thing, but boosting should be used sparingly with most tracks.

Fortunately, when the Bass Boost is off, the Sony MDR-XB950BT headphones possess some of the cleanest audio available in a wireless headphone. The percussion in "Cecilia" is very busy, with shakers, hands slapping the wood of a guitar and drum sticks on a hard floor. It's easy to lose any one of those details, and while some of them disappeared with Bass Boost on, they all quickly returned when Bass Boost was turned off.

Those percussion sounds were also noticeably more present than they were on the Sennheiser Urbanite XL. That headset, however, did a better job with the highs. There's a xylophone in "Cecilia" that rang almost like a bell on the Urbanites, but sounded as though it were coming from a pool of mud in the MDR-XB950BT.

Even with those muddled highs, I prefer the Sony MDR-XB950BT to the Sennheiser Urbanite XL. The Sony headphones have a way of replicating the timbre of a string instrument in a manner that the Sennheiser's cannot. Listening to Santiago Rodriguez's take on Rachmaninoff's Piano Concerto No. 2, I could actually feel the piano being played, as if I were in the room with the performer. The piano's strings seemed to thrum in my head, much like they would vibrate in my chest were I listening to the piece live.

The Sony MDR-XB950BT headphones have an uncannily pleasant ability to replicate that gut sensation of a live performance, but they also have an uncanny ability to capture live audio, often to ill effect. I used the headphones' Bluetooth calling feature to ring up a friend while I was heading out of the office. She immediately asked if I was passing through a parade. I wasn't. In fact, I was just dashing through the lobby. Yet she could clearly hear every other person in the glass-tiled room. That would have been useful if she'd needed to listen in on the security guard's day, but it made it having an actual conversation with her miserable.

Better mic isolation would have improved things immeasurably. As it stands I won't be using the Sony MDR-XB950BT to walk and talk any time soon.

Even worse, the lauded Bass Boost is only effective on if you're really into techno or hip-hop. If there's any kind of sincere nuance in your music's bass, you'd better make like the Fatback Band and keep on steppin' ... or you can just turn the Bass Boost off and enjoy one of the more solid pairs of Bluetooth headphones on the market.

Alex Cranz is the Assistant Reviews Editor at Tom’s Guide. When she’s not devising tests for new tech she’s figuring out the best way to run Plex on it. Follow Alex @alexhcranz. Follow Tom's Guide at @tomsguide, on Facebook.