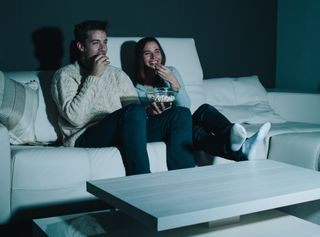 Sitting in front of the TV is as popular as it's ever been, but network and cable TV do not have the same hold over viewers that they once did. Whether or not you "cut the cord," streaming content onto your TV screen from services like Netflix, YouTube and Sling TV is one of the best ways to access your favorite shows and movies. There are many ways to get online videos on your living room screen. Here are your options:

Smart TVs: Do You Need a Streaming Player?

For those who are in the market to buy a new television set, check out the Tom's Guide primer on smart TVs. That article explains what these devices do and how to choose the best one for your home.

The major downside of smart TVs (save for those that run on the Roku OS) is that their channel selection is usually fairly limited. You'll be able to access a few dozen apps, rather than a few thousand, and new apps won't show up right away. Older models will also eventually stop receiving updates, and a TV is much more expensive to replace than a streaming player.

The gold standard for streaming devices, 4K HDR streaming media players come in two flavors: set-top boxes and dongles. Regardless of appearance, streaming players connect to your TV's HDMI port, then offer you access to hundreds, if not thousands, of apps. Most channels focus on TV, movies or music, but most platforms offer some productivity and gaming applications, too.

Set-box boxes: Set-top boxes are generally the most powerful and robust streaming players, as their size allows for more powerful hardware. The most prominent set-top boxes on the market are the Roku Ultra ($100), the Apple TV 4K ($180) and the Nvidia Shield ($180). Each of these devices gives you access to 4K HDR video, as well as thousands of niche apps.

The Roku and the Shield allow you to bring your own content along via USB or microSD; the Apple TV gives you access to your full iTunes library. Additionally, both the Shield and the Apple TV provide a robust selection of games, both casual and hard-core.

Streaming sticks: Then there are the 4K streaming sticks, which offer 4K HDR programming, but without the bells and whistles of a dedicated box. The dongles aren't quite as powerful, and you'll need to stream your own content using a media server, but you'll get a pretty significant reduction in price in return. These devices include the Roku Streaming Stick+ ($70), the Google Chromecast Ultra ($70) and the Amazon Fire TV ($70).

(The Fire TV isn't a stick or a dongle in the strictest sense of the term, but it has more in common with them than it does with full-size boxes.)

Exact features vary by device, but every streaming player runs apps that provide access to dozens of video and music channels, such as Amazon Video, Hulu, Netflix, Pandora, Plex and Spotify. Of course, not every app offers 4K HDR content, but the players are usually pretty good about pointing out where you can find it. Amazon Video, iTunes, Netflix and Vudu all offer 4K HDR programming, and some smaller channels are getting in on the act as well.

To learn about each box's strengths and weaknesses, read our list of the best streaming devices.

Streaming players are especially useful for viewers who still have 1080p TVs. After all, a 4K set is almost guaranteed to be a smart TV, but plenty of 1080p sets predate integrated apps — or simply don't offer them, to keep prices down.

Unless you're buying an older device (which is not the worst idea in the world; older streaming players are cheap, and still have access to thousands of channels), you'll probably be looking at three dongles. The Amazon Fire TV Stick ($40), Google Chromecast ($35) and Roku Streaming Stick ($50) provide just about every streaming movie, TV and music app you can think of, but max out at 1080p resolution.

At $30, the Roku Express is technically the cheapest name-brand 1080p streaming device around, but its unattractive design and underpowered guts make it a tough sell over the three sticks mentioned above.

While 4K HDR sticks will work fine with 1080p TVs and vice versa, neither idea represents a great investment. There's no need to pay a premium price for 4K HDR support if your TV can't handle it; by the same token, there's no reason to miss out on top-notch picture quality just to save a few bucks.

All three major consoles support streaming apps, to some extent. The Xbox One ($250) has more than 60 streaming media apps; the PlayStation 4 ($300) has about 50; the Nintendo Switch ($300) has only one, at present (Hulu, if you're curious). The Xbox One and PS4 also let you stream content from your PC or mobile device wirelessly via DLNA media server technology.

Although the PS4 and Xbox One give you access to most of the major video apps (Netflix, Hulu, Amazon Prime, Vudu, Youtube, etc.), their selection is still a bit more haphazard than a dedicated streaming player's. This is especially true when it comes to cable replacement services: the PS4 offers PlayStation Vue, while the Xbox One hosts Sling TV.

It's not worth buying a game console just to watch Netflix, but if you also want to play the latest games and watch Blu-rays, a game console is probably the right investment. (The Xbox One S and Xbox One X have 4K Blu-ray players; no PS4 system does.) Check out the Tom's Guide comparison between the Xbox One and the PS4 to see if one of them should be your streaming solution.

There are other ways to get streaming media on your TV. Many Blu-ray players come with streaming apps built in. However, like smart TVs, these systems don't receive updates very often, and the selection is fairly limited. It's worth researching if you're in the market for some physical media.

Hooking up a computer to your TV is usually an option as well, provided you have a model that supports HDMI output. Computers are the most versatile streaming devices around, and if you've got a wireless mouse and keyboard, you can watch almost anything you can imagine in your living room.

If you're willing to do a little programming yourself, you can look beyond the traditional streaming boxes into the world of DIY tech. A Raspberry Pi system, or a cheap Android box, can run everything from Netflix to Kodi, and all without the hassle of being locked into a big branded ecosystem.

Ultimately, there are plenty of ways to get streaming content on the small screen. The only questions are how much content you need, and how much you're willing to spend.