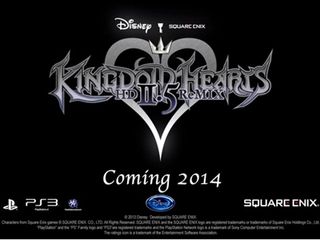 Hot on the heels of last month's "Kingdom Hearts 1.5 HD ReMIX," Square Enix has announced that a sequel to the popular Disney hybrid role-playing game is in the works, bringing more high-definition games from the series to the Playstation 3 next year.

Titled "Kingdom Hearts 2.5 HD ReMIX," this latest collection will consist of two games. The first, "Kingdom Hearts II Final Mix," is a "director's cut" of the classic PlayStation 2 adventure, which hasn't seen the light of day in the United States until this collection. Also included is "Kingdom Hearts Birth By Sleep Final Mix," which originally came out for the PSP a few years back, and makes its console debut in this compilation.

Last but certainly not least, remastered cinematics from "Kingdom Hearts Re:coded" will also be included.

There's no word on pricing for the collection yet – or if there will be a special edition like the one that "1.5 HD ReMIX" received, but it's likely to be around the same price at $39.99.